Report on the 1st (WM)²- Women in Mathematics Meeting 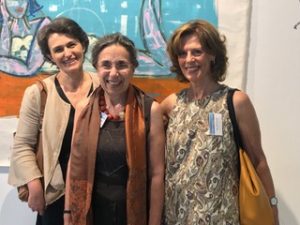 It’s a fact! The first meeting of women mathematicians in Portugal did happen. It took place at the auditorium in the Library Building of the Faculdade de Ciências e Tecnologia of Universidade Nova de Lisboa, thanks to the energy of the organizing committee, the enthusiasm of all the participants and the sponsorship of several institutions. You can read all their names in the conference’s webpage by following the various links available. 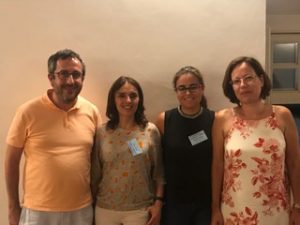 Here are some numbers: there were just over 60 participants, including all combinations of women, Portuguese or foreigners, working in Portugal or abroad. There were 9 invited talks, all by women, and 11 contributed talks, one delivered by a man. The talks covered topics such as algebra, analysis, geometry, probability and statistics and included a variety of applications.

The first remarkable point occurred already at the opening session which counted with the presence of the chair of the organizing committee, Ana Casimiro, and four men. One of the men was late because he had to drop off his children in kindergarden. Another man was vice-president of the CIG (the Portuguese Commission for Gender Equality). It made me wonder about gender issues (or, the fortunate occasional lack thereof). 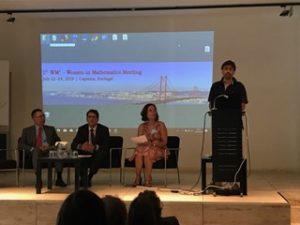 At the request of the scientific committee, most of the talks (invited and contributed) were rather informal and accessible to mathematicians outside the talk’s area of expertise. This allowed for ample discussion after each talk as well as some cross-contamination among fields. As we all know, no area of mathematics lives exclusively within itself. Because the conference was not dedicated to one particular subject, speakers and participants had enthusiasm for a wide range of topics and applications of mathematics. Some of the applications were motivated by constraints in the mathematician’s working environment as there were participants not just from departments of mathematics inside science schools but also in schools of medicine, engineering and economics.

Although this was a scientific meeting, a bridge between mathematics and teaching was created by the poster on display (and lively illustrated by Maria da Graça Marques). 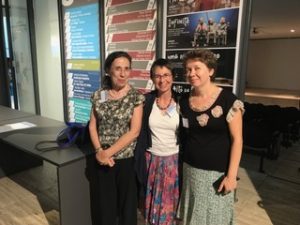 From left to right: Margarida Mendes Lopes (ambassador for the IMU Committee for Women in Mathematics), Colette Guillopé (founding member of L’association femmes et mathématiques) and Elena Resmerita (Deputy Convenor of the EWM).

Also beyond research, there were 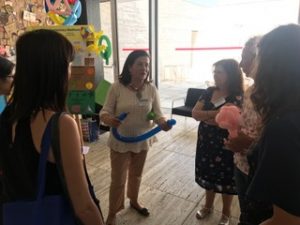 The panel discussion was preceded by a presentation by Teresa Clode from CIG and another by Margarida Mendes Lopes who showed the numbers of an article that is available in English at. 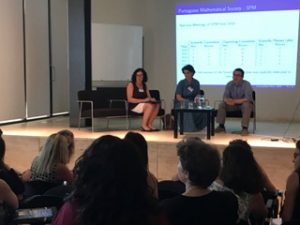 Panel discussion where you can see a lively audience as well.

The panel, in which I participated, was moderated by Maria Manuel Clementino and counted with the presence of Filipe Oliveira, the (male) president of the Portuguese Mathematics Society. There was a true discussion, not just among the members of the panel but also involving several (female) mathematicians in the audience. All shared their experiences and views on the role and current as well as future place of women in mathematics. Since the intervening participants were at all, from starting to top, stages of the career a very rich portrait was available. It must be said that the discussion did not finish with the panel but went on until the end of the meeting. 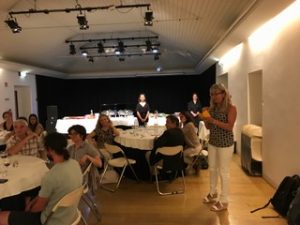 The dinner speech by Irene Fonseca.

The situation of Portuguese women in mathematics is a comfortable one, when compared to most countries. The gap appears at high levels of the career and in places connected to some prestige. One of the points made that, in my opinion, should not be forgotten, is that the position of women in mathematics is not disconnected from the role of women in society and thus, the general environment has to be taken into account when addressing the issues faced by women in mathematics. This 1st (WM)² – Women in Mathematics Meeting was, I believe, a good starting point for raising awareness and making future progress towards true equality.

I hope the photos (in this article all by Peter Gothen, a male mathematician, but see also the meeting’s webpage) illustrate well what cannot be described in words: the joyous atmosphere of people at ease and enjoying what they do well — maths!