goMATH in Zurich: a two week celebration of maths and women 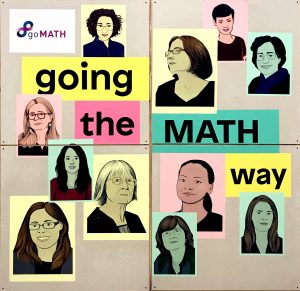 From March 11th, 2019 until March 22nd, the Mathematics Department (D-MATH) of ETH Zurich (ETHZ) held the goMATH event, a two weeks celebration of mathematics with a special emphasis on women’s contributions.

The origin of this event went back to January 2017, when Karin Baur, professor at the University of Graz and University of Leeds, pointed out to Hanspeter Scherbel, the departmental coordinator of D-MATH, the exhibit “Women of mathematics”, a project that portrayed many prominent women mathematicians in Europe through photographs and interviews. The corresponding posters could be downloaded  and displayed from the website womeninmath.net after previous permission.   Many universities throughout Europe organised such an exhibit and I enthusiastically accepted to be part of the team that Monika Krichel, the head of the D-MATH Communication Team, put together for this purpose at ETH. This was a project that raised questions similar to the usual ones for a regular research conference: what did we want the audience to be? where should such an exhibit take place? who should be involved, and how?, how much financing would we need? where would it come from? However it was also immediately clear that the answers in this case were much more open-ended, and some or our attempts to move forward were unsuccessful. For example, I wrote to the Technorama, the beautiful Swiss science center in Winterthur, asking to borrow some of their exhibits so that we could display the Women of Mathematics posters in the ETH main hall together with other items, to be determined. Did the message never reach the director of the Technorama?  Was I naïve in asking such a thing?  Did I make some other mistake? Probably I will never know, but I am still waiting for an answer. Obviously, experience in organising mathematical conferences was of no help in this case.  We needed more brainstorming, hence more brain power.

A few months went by, and a Steering Committee formed by the Chairman, Mete Soner, and by some colleagues in the mathematics department (Emmanuel Kowalski, Marloes Maathuis, Meike Akveld and myself) was formed. Sara Uberi-Papapietro joined Monika Krichel in the Organisation Committee. Things started shaping up nicely. I must say however that the initial efforts were definitely worthwhile, thanks to the previous chairman of the department, Peter Bühlmann, who decided to finance generously our project and thought that we should personalise the exhibit to tailor it to our department.  This was indeed the very helpful point of view from where we started to work.

To make a long story short, the Women of Mathematics exhibit ended up providing only the inspiration of the goMATH project, as their posters were eventually not displayed. The event started on Monday, March 11th with an inaugural ceremony attended by the ETH Rector, Professor Sarah Springman, in which Elisabetta Strickland, professor at the Università di Roma Tor Vergata, gave a beautiful, interesting and lively talk on the lives of some women mathematicians, starting from Hypathia up until Sonia Kovalevskaia. From Tuesday, March 12th until Thursday, March 14th, there was a symposium with fantastic talks delivered by renowned women mathematicians. To wit: Rima Alaifari (ETHZ), Alessandra Celletti (Università di Roma Tor Vergata), Miranda Cheng (University of Amsterdam), Dusa McDuff (Columbia University), Lillian Pierce (Duke University), Corinna Ulcigrai (Universität Zürich), Sara van de Geer (ETHZ). A panel discussion, moderated by the journalist Tanya König of CNN Money Switzerland, featured interventions by Corinna, Lillian, Elisabetta and Alessandra and was followed by a networking event sponsored by the Swiss branch of the EWM. There was also a flash talks session and poster session for young researcher, where mathematicians of all genders presented their work. In the free afternoon of the symposium Marcela Krämer, together with Monika and Sara, organised a social excursion including a trip to the Chocolarium near St. Gallen, where participants could make their own chocolate, followed by a social dinner.  A lunch organised by the ETH Women Professors Forum was also very well attended by mathematicians, physicists and engineers.

One of the activities in the second week of goMATH focused on career opportunities open to graduates in mathematics.  Mathematicians from several firms presented their work and exchanged their experiences with students from all levels.   There were also three workshops in which secondary and high school students were presented with problems that they could work on in groups, if needed with guidance. The problems ranged from the bridges in Königsberg, to measuring areas of polygons to modular arithmetic. Finally, Dr. Vicky Neale of Oxford University was invited to give a talk about number theory in the usual time slot of one of the first year mandatory classes. Needless to say, her outstanding communication skills made it an event for which there were only standing places.

All along the above events, the goMATH exhibit was displayed in the main hall of ETH, during the whole two weeks. It had two main focuses. On the one hand, there were several women mathematicians at different stages of their career whose research and professional life was portrayed either with a poster or a video. In parable to this, there was a competition among school classes which presented an objects representing some mathematical concept that had to be expressed without the use of words. During the two weeks we tried to have only seminar talks with women as speakers and the department generously financed all talks, contrary to the usual financing with individual credits.

In the ETH tradition, the two weeks were punctuated by lavish teas, aperitifs, lunches and dinner. You name it. The Department of Mathematics reimbursed the accommodation expenses of young mathematicians who came to any of the above events. We ended up having around 20 doctoral students and postdocs from abroad attending the symposium, more than 500 secondary and and high school students who came for the workshops and a total of 35 school classes that participated in the competition with 49 objects.

The natural question of course was how to ride the wave of this very successful event. Should we repeat the event? If so, how often? What should be kept for the future and what should be changed? At the moment we are thinking about two or three parallel events:

This said, it was an exhausting but exhilarating two weeks. In Switzerland, unfortunately only now do we start being able to face the issue of gender parity in a serious way. This goMATH event marked the official awareness that something has to be done to change the situation, and the intention to actually do it.  A very promising point is that, although the new Scientific and Steering Committees of these future events has of course an overlap with the existing one, new colleagues jumped on the bandwagon with enthusiasm.  Our thanks to them and, once again, to all of those who made this possible!