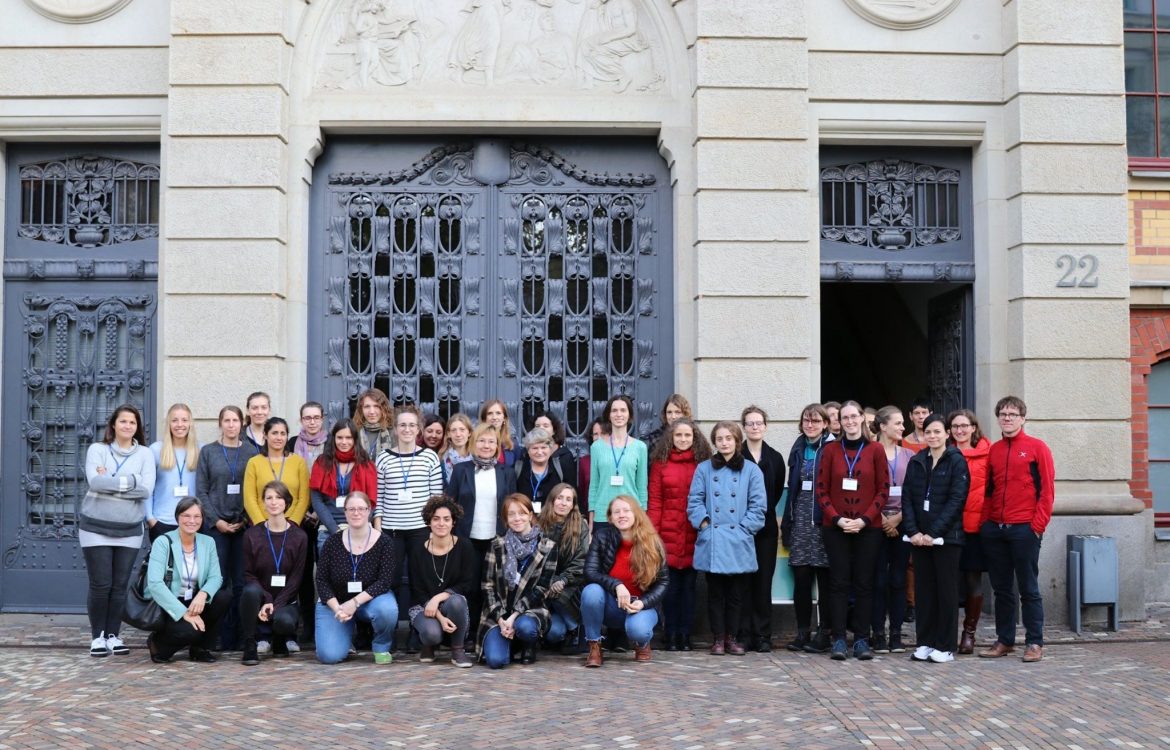 The 2019 Meeting of the German Chapter of EWM in Leipzig

▪ Lisa Hartung (Johannes Guttenberg University Mainz) spoke about extreme-value theory and the effect of correlations.
▪ Sabine Jansen (Ludwig Maximilian University of Munich) showed the audience how the recursive structure of trees can be used to derive inverse function theorems.
▪ Martina Juhnke-Kubitzke (Osnabrück University) explained “how to decorate a pumpkin” in her talk about the enumeration of faces in balanced simplicial complexes.
▪ Gabriele Nebe (RWTH Aachen) surveyed recent results on extremal codes and lattices, illustrating the use of symmetries in such studies.
▪ Sylvie Paycha (University of Potsdam) presented a multivariate approach to renormalisation which encodes locality as an underlying algebraic principle and showed its application to divergent multizeta functions, discrete sums on cones and discrete sums associated with trees.
▪ Petra Schwer (Otto von Guericke University Magdeburg) introduced the audience to Type A Schubert varieties and a characterisation of Schubert sharing the same tangent cone at the identity.
▪ Barbara Zwicknagl (Technical University of Berlin) discussed recent analytical results on the formation of patterns or microstructures in materials.

In addition, we had 9 contributed short talks and a poster session with lively discussions. The 67 registered participants enjoyed an attractive and diverse scientific programme which was complemented by a conference dinner on Monday night. On Tuesday night, Jürgen Jost welcomed the participants to the MPI MiS before the opening of the exhibition

Women of Mathematics throughout Europe – A gallery of portraits
by Sylvie Paycha and Sara Azzali.

Sylvie Paycha talked about the idea behind the creation of this exhibition and brought the panels to life by recalling excerpts from the interviews of the mathematicians portrayed. The MPI MiS offered snacks and refreshments before Agnes Handwerk presented the new video documentary

An Insight — Women in Science
by Agnes Handwerk and Harrie Willems.

This documentation consists of two parts. In the first part, Karin Baur, Sylvie Paycha, and Carola-Bibiane Schönlieb speak about their experiences as woman mathematicians and how they reconcile career and family. The second part offers glimpses from the „I, Scientist Conference“ in Berlin and the challenges that the early-career participants encounter.

Special thanks go the MPI MiS for financial support and great hospitality and, in particular, Valeria Hünniger and Jana Gregor whose expert administrative support was highly appreciated.