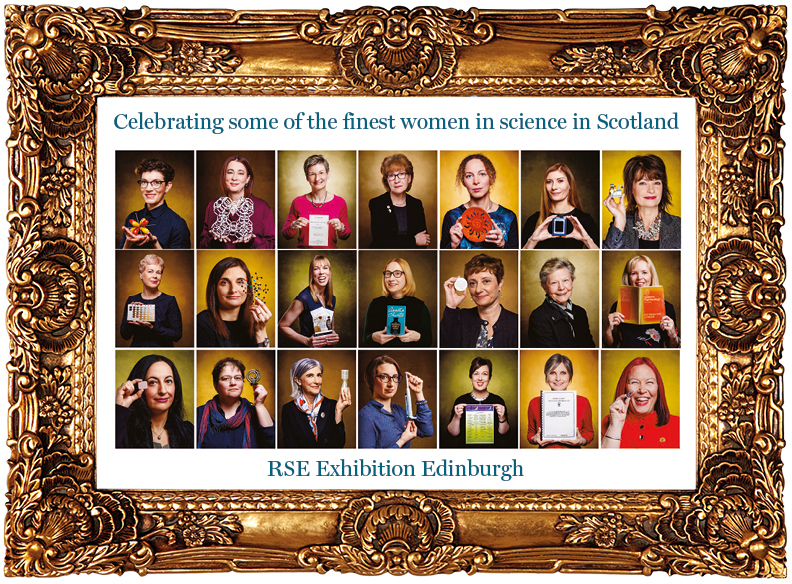 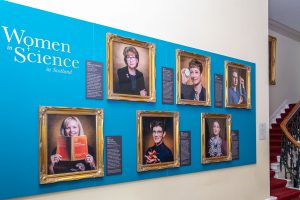 In November 2018, the RSE (Royal Society of Edinburgh) Scotland’s National Academy; published its report, ‘Tapping All Our Talents’ on women in STEM. It reported on the ‘leaky pipeline’ first noted in 2012 whereby almost three-quarters of female graduates were lost from STEM. While the 2018 report showed some good progress it also showed that there was still some way to go before reaching a position of gender equality. As part of its findings the report highlighted the importance of positive role models.

The RSE therefore decided to produce an exhibition to be launched at the 2019 Edinburgh Science Festival to raise the visibility of women in science either working in, or connected to Scotland. It would highlight the diverse careers and networks science unlocks; and hopefully inspire young women to consider STEM as a career.

The idea was to create an exhibition that would comprise a series of photographic portraits of some of the RSE’s female Fellows, all of whom are deemed outstanding in their field. They would represent different ages, disciplines, backgrounds, roles (business, government, academia) and demonstrate a good geographical spread.

Alongside each portrait would be a self-penned essay explaining their work and what motivates them. A short version of this would appear alongside the portraits, and a longer version in an accompanying guidebook. Taking inspiration from the all-male portraits which hung in the RSE’s reception in Edinburgh, the women’s portraits would be displayed in similarly impressive gilt-edged adorned frames to both complement and juxtapose the surroundings.

In addition, short films would be made featuring some of the women talking about their career journeys which would run on a screen in the RSE reception and also across the RSE’s digital channels.

To get the ball rolling, letters from the RSE’s CEO Dr Rebekah Widdowfield were sent to some 26 Fellows, explained the rationale behind the exhibition along with an invitation to take part. It had been anticipated that not all of the women who were approached would be able to take part, but in actual fact there was a 100% acceptance rate. The women who were asked and accepted were: 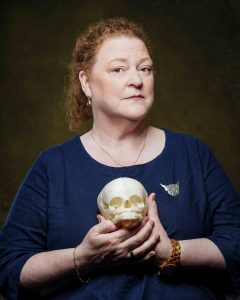 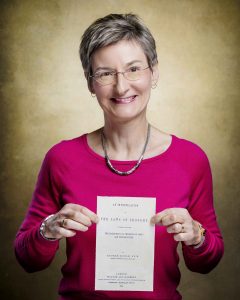 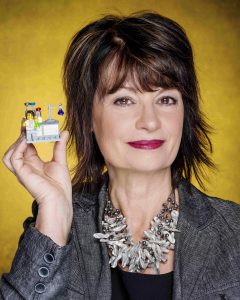 Respected freelance photographer Ian Georgeson was hired to photograph the women across six sessions in three locations across central Scotland to make it as easy as possible for them to participate.

All were asked to bring along an object that either illustrated their inspiration to become a scientist or symbolises an important part of their scientific journey and the results were occasionally surprising! Professor Dame Anne Glover, RSE President, brought a lego model of a female scientist in a lab, selected to symbolise her role in mentoring young women in STEM; Professor Lesley Yellowlees was photographed holding a dye sensitised solar cell; Professor Mercedes Maroto-Valer held a small block of carbon dioxide (CO2) which was the subject of her research; Professor Nicola Stanley-Wall brought her sixth-year school report on biology and Professor Naimh NicDaied, a specialist in forensic science and fires was pictured with the heating element of a kettle.

In the stories that the women shared to accompany their portraits, it was clear that there had been no one single route into pursuing a career in science: some had been interested in science from an early age, others came to it through serendipity and later on in life but what was apparent was the pleasure and joy they derive from discovering new things and knowing that they are making a difference to the world.

The exhibition remained at the RSE until December after which it moved to the Mitchell Library, one of Europe’s largest public libraries and reference libraries, in Glasgow till March 2020.

Due to interest in the exhibition, a seven-metre long portable version of the exhibition was produced, offered out on loan free of charge to RSE Fellows and followers. It’s ended up being used extensively for events at venues and events as diverse as the Festival of Politics at the Scottish Parliament, Glasgow Women’s Library, the STEM Hub at Borders College Hawick campus, the Scottish Seabird Centre in North Berwick and in the central offices of RBS. Due to demand, a second version was commissioned in early 2020.

Following a discussion with Edinburgh Airport, a version of the exhibition was installed at the start of the festive period. A mirrored-frame was included which posed the question ‘See yourself in science?’ so that passengers could imagine themselves as scientists. The response was extremely positive across social media with daily mentions from the general public, from many of the women featured in the exhibit and also from their colleagues.

A digital version of the exhibition was created and is now online, and the RSE has been involved in talks to see how this can be used more widely as a learning resource.

In summary, it’s been a well-received project whose reach has been extended with the portable and digital versions. At the time of writing, it had been shortlisted for a CIPR Excellence in STEM Award. Most telling for us has been the comments left for us from visitors, stating how inspiring they have found it and how timely an exhibition it has been. It feels that we have achieved what we set out to do with the exhibition. 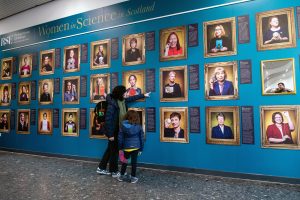 Facts and figures:
• RSE main exhibition in Edinburgh – 14.2k visitors
• RSE main exhibition at Glasgow Mitchell: 22k visitors
• Travelling exhibition – More than 4.8k
• More than 60k reach across the RSE’s range of digital channels. This does not include mentions and tags from members of the public’s social media accounts.
• Edinburgh Airport has had a footfall of over three million passengers during the time of the installation