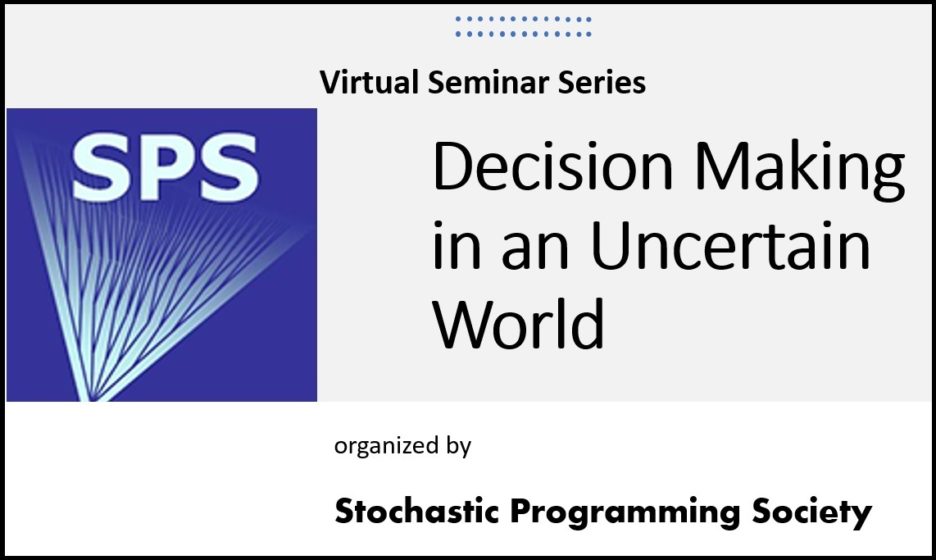 In the summer of 2020, the SPS held a virtual seminar series aptly entitled “Decision Making in an Uncertain World”.

In the summer of 2020, one of the most extraordinary summers in recent history, when many conferences were cancelled or postponed due to the COVID-19 pandemic, the Stochastic Programming Society (SPS) held a virtual seminar series aptly entitled “Decision Making in an Uncertain World”. The series gave the SPS community a way to learn about new research in the area and connect with colleagues across continents and different time zones via their shared interest in decision making under uncertainty.

The Stochastic Programming Society is a worldwide group of researchers who are developing models, methods, and theory for decisions under uncertainty. It exists as a technical section of the Mathematical Optimization Society (MOS) and promotes the development and application of stochastic programming theory, models, methods, analysis and software tools. It encourages the exchange of information among practitioners and scholars in the area of stochastic programming. The activities of SPS facilitate the advancement of knowledge through its triennial conferences “International Conference on Stochastic Programming” (ICSP), specialized workshops, and maintenance of the web site, Twitter and LinkedIn accounts. 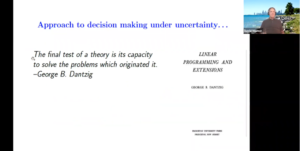 David Morton’s answer to “What is your approach to decision making under uncertainty?” during his talk on COVID-19 reopening

The Virtual Seminar series was designed by the governing board of the Stochastic Programming Society, also known as the “Committee on Stochastic Programming” (COSP), thanks to the suggestion of a member of SPS, Vincent Leclère.  The committee decided on the name of the seminar series, the format of the seminars, and names of the speakers, taking into account their provenience from all around the world, gender representation, and research topics.  The webinars took place biweekly on Fridays 7-8 AM Pacific Time in order to allow people at many different time zones to attend the events, starting on May 29th, 2020 using Zoom platform, kindly supported by the Integrated Systems Engineering Department of the Ohio State University.

The series consisted of seven talks with presenters from various parts of the world: two from Europe (Steffen Rebennack and Daniel Kuhn), one from South America (Alejandro Jofré) and four from the United States (Cynthia Rudin, Alexander Shapiro, David Morton and Katya Scheinberg).  The seminar series covered a variety of topics including theory, computations, and applications.  It also included topics that are relevant to the society but that go beyond the traditional topics of interest to the society such as machine learning. Topics covered by the series included the following areas of research:

Because the seminars covered a wide variety of topics, COSP decided to begin each talk by asking the speakers what their approach to decision making under uncertainty was.  Answers to this question by the speakers (in alphabetical order of their last names) provided stimulating “food for thought” to the community:

Decision making in a human-aware way.

With the permission of the presenters, COSP posted recordings of the webinars on the new Stochastic Programming Society YouTube channel.  Since June 15, 2020, the talks collectively generated more than 2400 total views. This was a great opportunity to learn about new research in the optimization under uncertainty area and connect with colleagues from all over the world.
Tags: articles, issue34, optimization
Previous Article Next Article
Text comment...