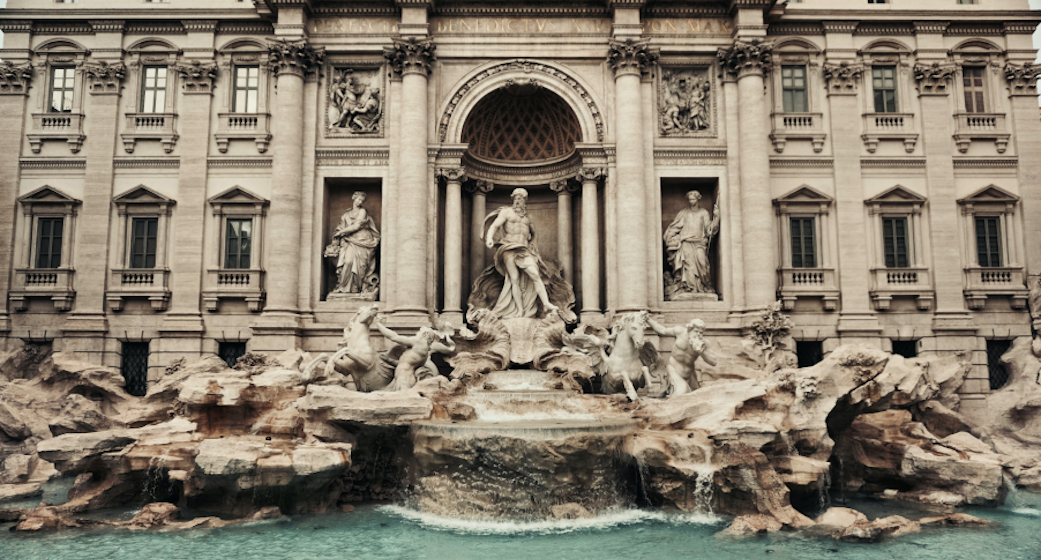 The sound of the Trevi Fountain in the COVID-19 silence

“Each something is the celebration of the nothing that supports it”

John Cage, Conference on Nothing

I am a mathematician; my research area is dynamical systems. This area often draws on pictures modulating and renewing our “scientific imagery”. But dynamical systems are dynamical, i.e. the variable time is essential. After this trivial observation, for some years now, alongside more mainstream research, I have been using new ideas and tools from dynamical systems to inquire into sound and the act of listening. Which timescales are specific to some signals, which timescales are specific to our perception, how they interact, and, the regularity of signals we are used to.

More recently I became interested in sound in space. Here the beauty is, to my understanding, that while it is clear that sound is a powerful factor of bodily orientation, all spatial information is encoded in the signal in a very very small timescale (down to 10-6 sec and possibly below). To be able to detect a large space auditively, we all use very small timescales. So, I started researching soundscape. And COVID-19 provided us all with a new and old soundscape.

We all fell into “silence” as soon as lockdown began.

We all fell into “silence” as soon as lockdown began. It has been a time to reflect on silence and its various implications. As with other changes induced by the lockdown, several special issues of scientific journals have been devoted to this silence. Sound happens in time and in space.

The John Cage quote at the beginning, taken from my previous life as a student of musical composition, is what keeps driving me. And, he went on, in 1956, to say “durations are highly fractional”. I do think of sound as interweaved with silence, much as in any interesting dynamical portrait.

Musicians’ attitude toward “silence” is much engrained in the time flow description: to a musician, silence is a time of waiting (with or without expectation). In musicians chats soon after the lockdown began, an image was circulated: the coronavirus was forcing a “corona”(in English: fermata), a time of wait all musicians know, when all instruments stop and all look at the director. In fact, the COVID-19 silence was indeed a stop, but we did things in the meanwhile. 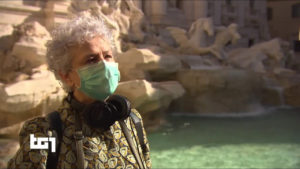 The silence we all experienced was due to the sudden interruption of many anthropic activities, mostly linked to mechanical noise, like vehicle traffic, ships, aeroplane, production factories, and the ever-present fans.  What we have called “silence” was in fact the sudden absence of familiar noises we had grown used to, and therefore we expected to hear. Among birds and animals in general, silence is known as an alarm, signaling the presence of a predator in the immediate territory. Probably we humans all reacted similarly to the novelty, initially treating silence for its alarming implications. Also in mathematics and dynamics, silence is a sudden drop in the amount of information arriving. In our case, it was an unexpected drop.

A change in the amount of information leads our minds to attention, in the sense that our listening mind will try to exploit any new signal entering to develop a new expectation scheme. All signals are considered clues, regardless of your awareness, and this fact, in turn, drives attention to the small timescale. We become attentive to the small sounds we had grown used to and neglected. Small in duration and small in energy. Therefore, the covid-19 silence has given us an opportunity to listen.

The COVID-19 silence has given us an opportunity to listen.

From a physical standpoint, ”sound” is represented by a function p(t), a change in air pressure along time. If the sound is spatialized, such a function is also a function of spatial variables. Otherwise, we assume it to be recorded at some special “earpoint”, say a microphone membrane. Now, one of the challenges is being able to encode this p(t) to study it, or to reproduce it. Then there is our perception of it, which also can be treated mathematically. In the nineteenth century, physicists started to study and devise coherent ways to measure reactions to perceptive stimuli. The Weber-Fechner law states that the reaction to a perceptual stimulus of a source does depend heavily on the background to which it is perceived. In particular, it states that for sounds, the perception depends on the ratio between the increased stimulus and the ground noise. This is a different way to say the same thing I said before: as we fall into what we call “silence”, sounds emerge to our awareness. Moreover, the amount of this emergence depends on the drop. So, we have two distinctive features in time: a drop in volume (letting smaller sounds emerge) and a drop in expected information (calling for attention). Our mind is trying to reconstruct our auditive memory, to re-establish expectation and assess information. And now something happens, some of the sounds that emerge were already in our memory. They are recognized, they are familiar sounds we thought we had forgotten.

Obviously mathematically speaking the process is interesting only if shared by many people. For example, shared soundscape all residents are used to in a subliminal way. This is the case with fountain sound in Rome, Italy. There are so many fountains. Different types of fountains with small water streams, central jest, cascades, in the middle of a piazza or in the corner, or maybe tucked into a courtyard or a cloister, invisible to the passerby, but still audible. They are part of our cultural heritage. On holidays or late at night, you can walk from one to the other guided by their sound. During COVID-19 silence, all of these sounds surfaced again.  I repeat: it surfaced to our perception (from silence), it surfaced to our personal and collective memory, surfaced to our bodily sense from far away sources, often unseen. 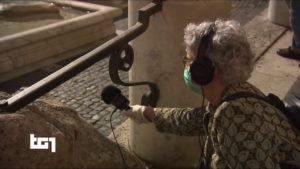 I would like to underline that the sounds we have lost in COVID-19 silence were mostly very periodic and usually difficult to locate. The sounds we recognized afterwards were mostly “natural”, meaning a combination of regularity and unpredictability, which is being researched. All interesting enough to warrant a study. But, to analyze such signals we need to acquire the signal, and in order to process them we need experts in complex systems.

The problem, in Rome, was the lockdown was so strict and sudden, I did not have access to my work equipment locked in the department. And going out to record would have needed special permission. But, Italy has been strict (and seen wonderful results health-wise) therefore, I decided we could do otherwise. I had documentation of some fountains from before lockdown, normal times, normal ground noise. Together with two theoretical vulcanologists (both women) from Salerno, we had started analyzing their signals, to ascertain regularities. Volcanologists and seismologists are experts in complex signals processing, and in extracting regularities if any. We wanted to compare then with now. We did it, we worked online, and we wrote a paper devoted to this comparison. 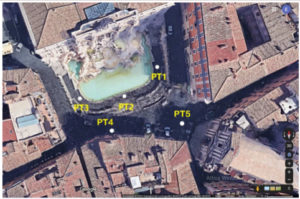 Piazza Fontana di Trevi, Rome. The map shows the points where the signal was recorded (“earpoints”). Points 1-2-3 for the pre-Covid phase; points 4-5 used in lockdown and afterwards (Map data 2020 Google). The picture is from: De Lauro, Falanga, Tedeschini Lalli, The sound of the Trevi fountain in COVID-19 silence. To appear in: Noise Mapping 2020

I called on two musician friends, and discovered what I had expected, namely that all musicians are “expert listeners” and they usually own a decent and agile device to record, acceptable for publishable documentation. Each of them recorded the fountain near their home, which was allowed. One in Piazza Delle Anfore, the other in Fontana di Trevi. The one in Fontana di Trevi got stopped and searched by the municipal police each time. This means that Romans, in their allowed daily stroll, would actually try to go to the Trevi fountain. So, officers would ask where they lived and send them home if they were not allowed to be there. Again, people, normal people, not tourists, were going to a familiar sound. Later people rediscovered other fountains and used their sound to contextualize auditively their videos, something that had never happened before. The videos are on Youtube.

All in all, I think this silence has changed our habits and attention. During the complete lockdown, I was teaching (online) a graduate course to some 60 confined students from the School of Architecture (Roma Tre). We all started window listening. It was great. We knew we were making a special sense out of a special period. Students exchanged information and drew maps of what was happening in their neighbourhood. They grouped to listen to audio through webcams around the world. They contacted other students, locked down in faraway countries and compared what they were hearing.

We all started window listening. It was great. We knew we were making a special sense out of a special period.

In the end, their act of listening was so changed that, come June, and exiting the lockdown, most of them could not stand the cicadas. I gathered information. There is no evidence that the cicadas’ population had an increase. Experts rather think we have changed our listening attention. While we can stand cicadas in open space, many people in an urban setting report now being annoyed: it is probably due to cicadas being confined in semi-reverberant spaces of which we were not aware before.

Our ears have let us open our wings and listen to a wider world. We have become picky. I do hope some of this taste for our own comfort will find its place in future laws and protocols.

COVID-19 hit differently, among people and among areas, even soundwise. It is important to realize that lockdowns in crowded neighbourhoods and high-rise condos also result in new forms of acoustic pollution due to the high concentration of people. This, in turn, is one of the several factors pointing to community health and mental health problems connected with severe lockdowns. While some acoustic intrusions can be avoided, it is not wise to try or expect to be able to silence everyday life. Let adults quarrel, let kids play, let them sing (…no loudspeaker, though!).