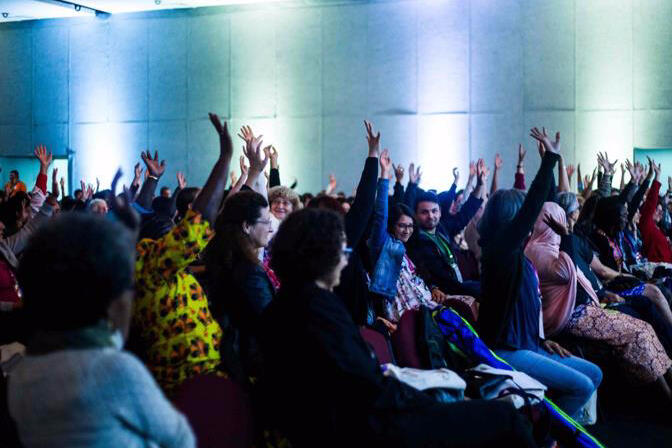 Celebrating Women in Mathematics: the International Success of the May 12th Initiative.

An interview with Marie-Françoise Roy and Elisabetta Strickland by Olga Kuznetsova.

100 events. 5 continents. 6 regional organizations of women in mathematics. The May 12 initiative,
“Celebrating Women in Mathematics”, was momentous and inspiring. The idea started during the World Meeting for Women in Mathematics (WM)^2, the day before ICM 2018 in Rio. It had been a year since the devastating loss of Maryam Mirzakhani, the first and only female Fields medallist, and the Women’s Committee of the Iranian Mathematical Society proposed to commemorate her by celebrating the achievements of female mathematicians on the day of her birthday, May 12. We talked to two prominent mathematicians, Marie-Françoise Roy (University of Rennes 1) and Elisabetta Strickland (University of Rome “Tor Vergata”) about the celebrations.

What were your first thoughts when you heard about the initiative?
Marie-Françoise This celebration was proposed by the Women’s Committee of the Iranian Mathematical Society. As one of the organizers of the first World Meeting for Women in Mathematics (WM)^2, I was among the people contacted by them. I immediately thought it was a great idea, and particularly so because it was an initiative coming from Iran.

Elisabetta I sincerely believe that this was a very good idea: an extraordinary reason for talking about women in mathematics today and celebrate them.

Do you know if there have been earlier attempts to launch a day celebrating the contribution of women to mathematics?
Marie-Françoise To the best of my knowledge, no. In fact, it seems that before this initiative, the regional organizations for women in mathematics never had a common action together.
Elisabetta Well, you need a strong inspiration to involve so many countries around the world to adhere to an initiative and Maryam Mirzakhani, being the first woman to win the coveted Fields Medal, and then dying shortly after being unable to succeed in remission from cancer was a really powerful reason to go ahead.

Both of you were personally involved in the organization of the celebration. Could you tell us more about what you did?
Marie-Françoise After the vote of (WM)² participants in Rio (pictured in the featured image of this article), and since (WM)^2 was initiated by the IMU Committee for Women in Mathematics (CWM) I am chairing, it looked natural to myself and my co-chair and the main (WM)² organizer, Carolina Araujo, to have the initiative led by the CWM.  So I started creating on a project website with my young colleague Olga Romaskevich and a professional designer and getting everything ready to launch the initiative.

I was the one posting all events on the May 12 interactive map and, given the success of the initiative, it was much more time consuming than I had anticipated, but it was a real pleasure to see the initiative grow, and to collect photos and reports! –  Marie-Françoise Roy

Because the IMU was also involved in an intense diplomatic campaign to have March 14 (Pi day) recognized as the International Day of Mathematics by UNESCO before its launch in 2020, the IMU officers feared that another international initiative directly supported by IMU would create confusion. Together with Carolina we then thought of involving six regional organizations for women in mathematics (European Women in Mathematics, the Association for Women in Mathematics, the African Women in Mathematics Association, Indian Women and Mathematics, Colectivo de Mujeres Matemáticas de Chile and the Women’s Committee of the Iranian Mathematical Society), they all agreed to carry out the May 12 together. Moreover, the EWM, with symbolic help from the AWM, paid for the design of the website. Carolina and I remained active members of the coordination group, but we made it clear to the IMU that we were acting as individuals and not as CWM representatives. I was the one posting all events on the May 12 interactive map and, given the success of the initiative, it was much more time consuming than I had anticipated, but it was a real pleasure to see the initiative grow, and to collect photos and reports!

Elisabetta When Marie-Françoise told me about May 12, I really felt responsible for helping make this initiative a success, especially because  I represented the EWM in the Coordination Group, and wanted to think of something special. Luckily my Department has considerable funding due to a “Progetto di Eccellenza”, which allows sponsoring initiatives of this kind. In any case, I involved the Unione Matematica Italiana in a kind of advertising campaign to spread the news among Italian mathematicians.

The project was off to a good start. It received overwhelming support during (WM)^2 and the IMU Committee for Women in Mathematics (CWM) volunteered to spearhead it. There were plans to build a project website and several local initiatives were proposed. Yet a few months later the situation changed as Marie-Françoise explained.  Without the IMU funding, the future of  the May 12 initiative was unclear.

This moment of uncertainty proved to be decisive in forging the first international collaboration of regional associations of women in mathematics, representing North America, Europe, Africa, India, Chile, and Iran. The coordination group included representatives from each organization.

Marie-Françoise, looking back at the initiative: what you most proud of? What kind of changes would you like to introduce next year?
I remember that when we were discussing the organization of May 12 with Carolina after (WM)² we were thinking that 30 local activities for the first year would be already a wonderful success. But finally, 109 initiatives were reported on May 12 website! I think that the website was very well designed, and looked very attractive. We were proposing various suggestions for activities that were inspirational all over the world. The film “Journeys of Women in Mathematics”, a 20-min film created by CWM, filmed and edited by Micro-Documentaries and made possible by a grant from the Simons Foundation was shown in many local events. The Exhibition “Remember Maryam Mirzakhani”  (curator: Thais Jordao, designer: Rafael Meireles Barroso), also an initiative of CWM for (WM)², was shown in Sao Paolo Brazil, MSRI USA, Fields Institute Canada, Lund Sweden, L’Aquila, Italy, Nesin village and Istanbul Math Festival Turkey around May 12.
For next year, we are going to follow a similar scheme. However, we are going to let people add their events to the interactive map themselves, as it will make the whole process much lighter for the coordination. However, some kind of moderation will be needed from the coordination group since we do not want unrelated activities to pollute May 12 initiative!

May 12 events around the globe in 2019. Click here to see full screen

May 12 would not be a truly international celebration if it were not for the constellation of local events. And while the inter-organizational coordination group was working hard on getting the recognition of the initiative, local organizers faced their own challenges.

Elisabetta, you organized a tribute to Maryam Mirzakhani in Rome. Could you tell us more about it?
As I already said, I felt it was my duty to think of something special. So I asked Giorgio Parisi, who besides being an extraordinary physicist, is also the President of the oldest academy worldwide, the Accademia Nazionale dei Lincei, if he could allow us to use the Accademia for an event which had to represent a tribute to Maryam Mirzakhani. He guided me through the procedure to have the permission to use the beautiful Sala delle Scienze Fisiche of Palazzo Corsini in Rome. Then I asked the help of my colleagues Alessandra Celletti and Alfonso Sorrentino for the organization. First of all, we had to choose a proper speaker and we decided for Corinna Ulcigrai, Italian but based in Bristol University, UK and now moving to the University of Zurich, who is an expert on Maryam’s mathematics. So on June 3, Corinna delivered a beautiful talk entitled “Billiards, flat surfaces, and the Magic Wand Theorem”, which was outstanding.

I’ve had the pleasure of attending the lecture held by Prof. Corinna Ulcigrai, on the 3rd of June, 2019, as a tribute to the late Maryam Mirzakhani. The content of the lecture has been definitely interesting: Prof. Ulcigrai is a gifted speaker and managed to explain clearly and intuitively the achievements of the great mathematician, while always captivating the audience’s attention. In addition, the narration was also enriched by the fact that the speaker had the opportunity of meeting Mirzakhani during her career. It was a great occasion to tribute the many contributions given to Mathematics by an amazing scientist such as Maryam Mirzakhani.

-Irene De Blasi, Attendant of  the May 12 event in Rome

Elisabetta, what challenges did you face and how did you overcome them?
The only real challenge was convincing the people that May 12 was really important in order to celebrate women in mathematics. Luckily the message arrived!

In your opinion, how should May 12 evolve in the coming years?
Elisabetta I believe that next time it will be easier, as now more people know about the initiative. Moreover, a collection of photos, posters, and various items are available online to look at and be inspired, if we want to help women in mathematics worldwide here we have a wonderful opportunity.
Marie-Françoise I agree entirely with Elisabetta, it will be easier next time. The initiative will continue to grow. The coordination group is invited to write an article for the Notices of the AMS to be published in December 2019 and this paper will make the initiative even better known.

Why are such initiatives important?
Elisabetta First of all Maryam Mirzakhani deserves such a tribute, even if she is gone far too soon, and as she represents a strong inspiration for thousands of women who pursue maths in their lives, her iconic figure helps in promoting women in this fascinating field of science.
Marie-Françoise Another aspect is that such initiatives allow women to express their love and enthusiasm for mathematics, and their eagerness to see the contributions of women to mathematics better acknowledged. It gives them energy and self-confidence.