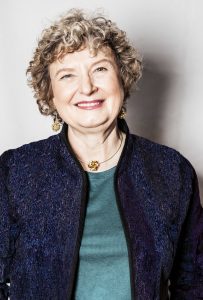 This year Prof. Ingrid Daubechies has been awarded one of the L’Oreal-UNESCO International Awards for Women in Science recognizing her “exceptional contribution to the numerical treatment of images and signal processing, providing standard and flexible algorithms for data compression. Her innovative research on wavelet theory has led to the development of treatment and image filtration methods used in technologies from medical imaging equipment to wireless communication”.

Wavelets are wavelike functions that can explain complex structures in signals and images, in solutions of partial differential equations, by decomposing them into translated and dilated versions of a `mother wavelet’. They form an orthonormal basis of square integrable functions and can be seen as a further development of the Fourier transform, characterising signals in time-frequency by spatially localised, somewhat oscillatory, building blocks of different scale and amplitude.

Wavelets constitute one of the most natural building stones of functions that exhibit multi-resolution structures. Examples of such functions are digital images.

While still in Belgium, Ingrid Daubechies, together with other colleagues such as Ronald Coifman and Yves Meyer, started the wavelet revolution in signal processing in the late 1980s. They pioneered the field of modern applied harmonic analysis with the introduction and analysis of so-called multiresolution analysis (MRA) – the design method of discrete wavelet transforms.

One of the most influential and most commonly used MRAs carries Prof. Daubechies name: The Daubechies wavelets are a family of orthogonal, compactly supported wavelets that define a discrete wavelet transform and are zero outside a finite interval.

Moreover, the so-called Cohen-Daubechies-Feauveau (DBF, biorthogonal) wavelets, are the key component in the JPEG2000 compression standard, where they replaced the Fourier transform as was used in the preceding JPEG compression.

So, what about L’Oreal – a cosmetics company – awarding prizes to women scientists? Well, I would say it is a great thing and it really does help in destroying our stereotypes of the genius scientist who is a guy with shabby clothes and glasses. The consequences – among others: also popular magazines such as Marie Claire are writing about a female mathematician now! In her interview with Marie-Claire, Prof. Daubechies says “In order to apply them [Wavelets] you have to mutilate the theory, and you would lose the beautiful mathematical property. I wanted to see the constraints of the application. I turned the whole theory on its head.”

The EWM congratulates Prof. Ingrid Daubechies for her outstanding work and for the well-deserved honour of receiving the 2019 L’Oreal-UNESCO Award.