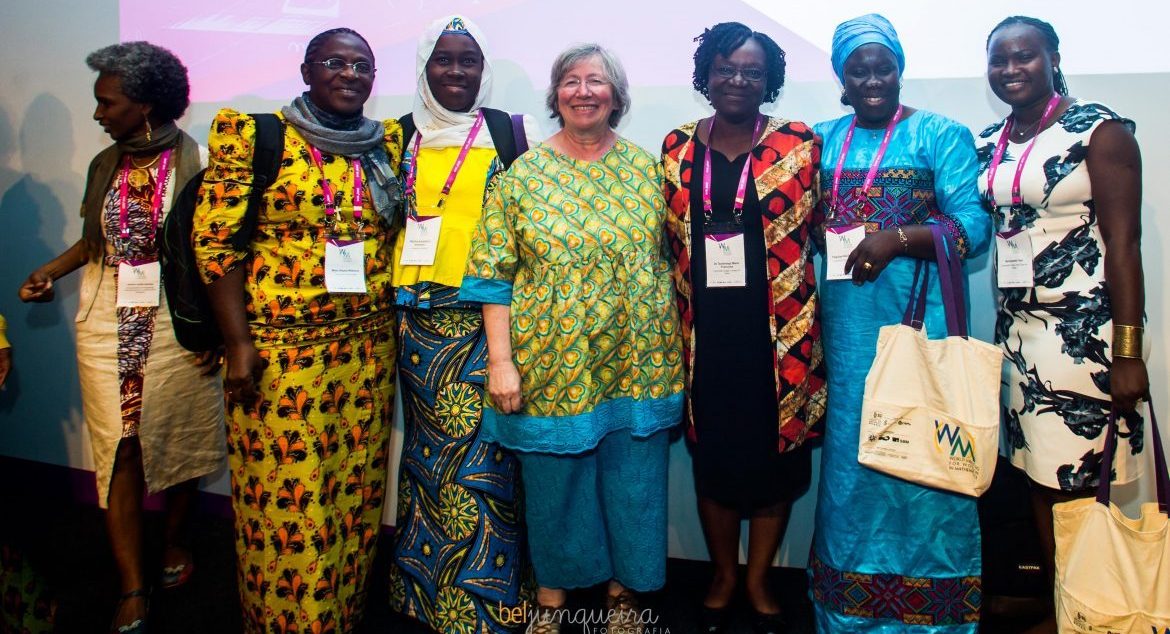 You were recently one of the organisers of the first World Meeting for Women in Mathematics (WM)², a satellite event to ICM 2018, during which you also participated in the CWM panel “Gender Gap in Mathematical and Natural Sciences from a Historical Perspective”. We would like to hear your considerations on these events.

(WM)², a CWM initiative, was an international meeting with a Latin-American focus. The scientific committee, chaired by Georgia Benkart, selected a key-note lecturer (Monique Laurent), three invited lecturers (Alicia Dickenstein, Salome Martinez, Maria Eulalia Vares) and a public lecturer (Maria Esteban).  The program included posters (both mathematical and on women in mathematics), and a tribute to Maryam Mirzakhani. In particular, the Maryam Mirzakhani Memorial exhibition opened during (WM)² and lasted to the end of the ICM.

One part of the program I was particularly enthusiastic about was the group discussions where every attendee could give her opinion: there were about 200 participants divided into 15 discussion groups. Each group focused on one topic and used a common language of their choice. The discussions lasted for about one hour, and at the end each group was invited to formulate recommendations. The conclusions were later synthetized by the organizers and regarded the following topics: strategies to motivate girls to get a degree in mathematics, and to encourage women to do research; how to highlight contributions by women and establish role models; public policies to promote women in science and to overcome the gender gap in mathematics, encouraging diversity.

I quote two interesting questions that were discussed there:

Rather than asking women to be able to compete like men do, we need a friendlier atmosphere in the community that allows and values diverse types of behaviour.

The report of the panel is included in ICM 2018 Proceedings. A volume containing the proceedings of the (WM)² will be published by Springer in its Association for Women in Mathematics Series.

(WM)² as a satellite event of ICM is an excellent opportunity to give global visibility to women in mathematics and increase public awareness on the issues concerning gender balance and diversity. Do you think that the organisers of (WM)² are free in the organisation, in the sense that, to what extent are their choices influenced by ICM, which traditionally has not given much space to women?

Thanks to the main organiser Carolina Araujo who was also in the ICM Local Organization Committee, we reached a perfect balance between independence and visibility.

(WM)² took place the day before the beginning of ICM, in the same venue, and the end coincided with the ICM welcoming reception. I was also very pleased to see that during the social dinner at the end of ICM many pictures of (WM)² were shown, even if formally we were not part of ICM.

(WM)² organization received a generous support from ICM organizing committee for the rent of the venue and the infrastructure, while (WM)²’s  program committee was totally independent from ICM program committee. A significant part of the budget came from CWM and from local sponsors.

The focus of the film is the diversity of women mathematicians worldwide, and their common passion. The version premiered at (WM)² presented three women active in organizing regional and trans-national networks in developing countries. They were Carolina Araujo (Rio), a CWM member, (WM)² main organizer and also an ICM lecturer; Neela Nataraj (Mumbai), CWM associate and active member of Indian Women in Mathematics; and Amina Pecha (Yaounde, Cameroon), the founding chair of the Cameroon Women in Mathematics Association. Micro-Documentaries met them in their home countries and a grant by the Simons Foundation made it possible for all of them to attend (WM)².

I find the film “Journey of Women in Mathematics” really wonderful and I encourage everybody to watch it.

I find the film really wonderful and I encourage everybody to watch it.

Regarding the second part of the question, I do not think that a single meeting such as (WM)² has a direct impact but it adds up to the systematic support given by CWM to networks of women in mathematics from the developing world, and the whole process certainly raises self-confidence and provides social contacts and scientific opportunities.

(WM)² had a total of 296 registered participants, mostly women, plus around 50 guests, coming from 51 countries. Many of them were OpenArms grantees. One important aspect of the OpenArms program is to make visible the mathematics existing in developing countries to the whole mathematical community and to improve inclusion. The scientific benefit of attending such big meetings is maybe not immediate but I do believe that there will be a significant impact if this initiative is continued in the next ICMs. It seems that this will be the case, since the ICM organizers in Saint Petersburg have already announced a similar initiative.

The congress was also an opportunity for you to participate in the panel “Strengthening Mathematics in the Developing World”.  How was this received by the community?  Has this lead to new initiatives, proposals, or discussions?

The panel was well attended with many interesting panelists and it was a good opportunity for me to describe CWM initiatives and to advertise them. I was particularly interested in the presentations of colleagues from regional organizations from Asia and Latin-America.  However, there was not enough time left for discussion with the audience.

Are there initiatives that have been launched after the events in Rio?

I would like to mention two: the Remember Maryam Mirzakhani exhibition and the launching of May 12 as the Women in Mathematics day.

As a tribute to Maryam Mirzakhani, CWM created a Memorial Exhibition with 18 original posters portraying her life and work, two volumes of her mathematical work, one volume with articles about her, and a book of condolences for attendees to sign. The exhibition was inaugurated at the (WM)² and remained open during the ICM 2018.

Any institution or venue interested in hosting the Exhibition is welcome to contact CWM. Amongst other places, it has already been presented at the Stanford Mathematics Department, where Mirzakhani was a professor, where it will be permanently hosted, and by the Fields Institute during the Fields Medal Symposium 2018 in honour of Mirzakhani.

In April it will be hosted by the Association for Women in Mathematics (AWM) Research Symposium at Rice University.

A celebration of Women in Mathematics will take place for the first time in 2019 on May 12th, which was Mirzakhani’s birthday.

A celebration of Women in Mathematics will take place for the first time in 2019 on May 12th, which was Mirzakhani’s birthday.

Ashraf Daneshkhah from the Women’s Committee of the Iranian Mathematical Society, proposed at the (WM)² to celebrate the date every year inside the mathematical community, to encourage women from all over the world to advance their achievements in the field. It was approved by a vast majority.

Can you update us on your project the “Gender Gap in Mathematical and Natural Sciences from a Historical Perspective”?

The project is entering its third and final year. We have collected about 32000 answers, for the Global Survey of Scientists,both from women and men. The number of answers from the mathematical community is very satisfactory, nearly 6000.

This year will be devoted to analyzing the results from the Global Survey of Scientists and the Joint data-backed Study on Publication Patterns, and to formulate recommendations to be implemented by the partners of the project.

More information can be found at: https://gender-gap-in-science.org/

During ICM 2018, none of the prizes was awarded to a woman. This is not a very encouraging message for the new generation. Do you want to comment on this? What can the mathematical community do about it?

ICM is not all about prizes, it is also about invited lecturers, since being invited to give a talk at ICM is also important in a scientific career.  And there are systematic efforts to have more female speakers. There has been a change over the last ICMs, and the proportion of women speakers is now about 15%.

It is important to nominate women for prizes: if you believe in an outstanding woman, you need to make sure she is nominated.

Prizes are another issue since each committee works independently.  In the committees the percentage of women is reasonable, but having women in committees does not imply women receiving prizes: often even women do not think of women, they think of men to nominate.  Very often the committees do not receive enough female nominees.

So, it is important to nominate women for prizes: if you believe in an outstanding woman, you need to make sure she is nominated.

On the stage at ICM Rio, there were neither female prize winners nor female mathematicians: the five women there were a banker representing a sponsor and members of the helping staff.  It was a real caricature, and very much commented.

On the stage of ICM Seoul, there were Ingrid Daubechies, IMU president, Park Geunhye, President of Korea, and Maryam Mirzakhani, the first woman Fields medalist: it was a great picture of three strong women together! Unfortunately, this great event remains a singular isolated point. I am happy I witnessed it.

What’s your vision for the next (WM)²? What are your expectations?

I believe that there will be a new (WM)² in Saint Petersburg, given the huge success of the one in Rio. Interestingly, the Paris bid had included (WM)² in its project while the bid in Saint-Petersburg (which finally prevailed) did not mention it. However, the organizers in Saint-Petersburg made it clear that they now want to have a (WM)² in 2022.

We started to think about the organisation but we do not know yet how we are going to proceed.

Ideally, (WM)² should have a regional flavour in each of its venues, while keeping all the good features settled in Rio:  the regional activities in Latin America culminating with (WM)² in Rio made a big difference for women in the area. But at the moment we do not see how to create the same enthusiasm and motivation for women in Russia and neighbouring countries.

I would also like to have an exhibition, as well as a new film, but we cannot simply repeat what we did in Rio.