by Luz Roncal and Diana Stan

European Women in Mathematics Summer Schools are intended to provide a stimulating intellectual environment for PhD students and post-docs from different countries and various mathematical disciplines, with special encouragement for the participation of women mathematicians. In April 2017, the European Women in Mathematics (EWM) and European Mathematical Society (EMS) opened a call for proposals for the organisation of the 8th Summer School in a series initiated by EWM.

The Summer School was mainly aimed at PhD students and post-docs interested in deepening their understanding of these topics and, as explained above, female mathematicians were especially encouraged to participate.

The theory of second-order elliptic equations has been flourishing during the last fifty years, making some substantial advances during the last years. Deep mathematical concepts lead to the field of Elliptic PDE’s, such as competitive systems, scattering theory or the Yamabe problem. The frameworks of study may be also diverse, ranging from the Euclidean setting to hyperbolic spaces. Moreover, there are important applications to population dynamics, theoretical physics or differential geometry. In Europe, there is an important mathematical community working in the area of Elliptic PDE’s, in particular, brilliant women mathematicians with strong influence in the development of the field.

The main goal of this Summer School was to introduce two research lines of current interest in Elliptic PDE’s: Competitive Interaction Systems and The Fractional Yamabe Problem. These topics were developed through the corresponding series of lectures. The titles of the mini-courses and the lecturers were:

Both Prof. María del Mar González and Prof. Susanna Terracini are outstanding researchers in the area of Partial Differential Equations. They are world-recognized experts in their fields, and their lectures were certainly stimulating.

The lectures were complemented with plenary talks, long and short talks and a poster session. In this way, PhD students, post-docs and young researchers had the opportunity to be actively involved in the School. 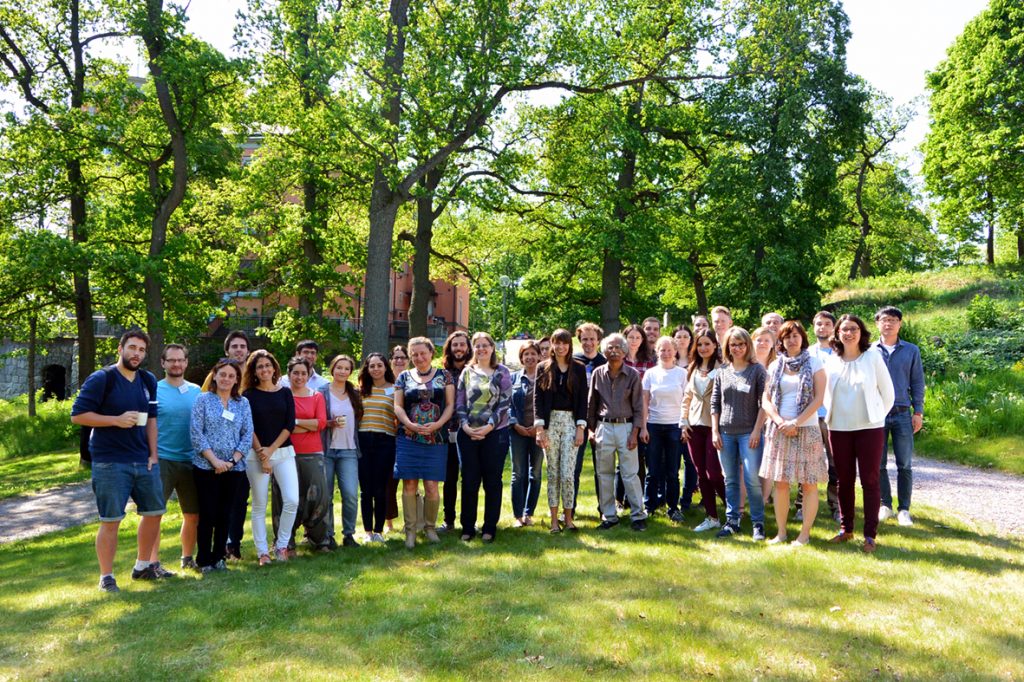 The Oversight Committee was appointed by EWM and the EMS Women in Mathematics Committee in consultation with IML. It consisted of

Appointed Administrator at the IML

The workshop had a total of 34 participants, including the two organisers, of which 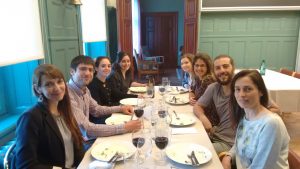 Structure of the School

One of the aims of the School was to give all the participants the possibility to get involved in the School’s activities by presenting their research, either with a talk or a poster. This led to a very stimulating environment, because the presentations naturally lead to questions and discussions.

The schedule included 2 mini-courses (5 hours each), 5 plenary talks given by experts in the field, 6 talks by postdocs (30 minutes each) and short talks by PhD students and early career postdocs. A poster session was also organised. The structure was as follows:

The Summer School was developed in a very friendly and easygoing atmosphere. This fact encouraged the participants to be part of the School’s progress in many ways: by asking questions at the end of the talks, by taking part in blackboards discussions, and by motivating group or individual work.

The funding was devoted to:

We mention that two participants covered completely their own expenses.

Abstracts of the mini-courses

Several physical phenomena can be described by a certain number of densities (of mass, population, probability, …) distributed in a domain and subject to laws of diffusion, reaction, and competitive interaction. Whenever the competitive interaction is the prevailing phenomenon, the several densities can not coexist and tend to segregate, hence determining a partition of the domain (Gause’s experimental principle of competitive exclusion (1932)). As a model problem, we consider the system of stationary equations

In this series of lectures, we will undertake the analysis of qualitative properties of solutions to systems of semilinear elliptic equations, whenever the parameter \beta , accounting for the competitive interactions, diverges to infinity. At the limit, when the minimal interspecific competition rate \beta=\min_{ij}{\beta_{ij}} diverges to infinity, we find a vector U=(u_1,\cdots,u_h) of functions with mutually disjoint supports: the segregated states: u_i\cdot u_j\equiv 0 , for i\neq j , satisfying

We will consider the following aspects:

The aim of this course is to present one very recent topic in differential geometry: the fractional Yamabe problem, both from the analytic and geometric points of view, but especially towards the PDE community interested in nonlocal problems.

The basic tool in conformal geometry is to understand the geometry of a space by studying the transformations on such space. The simplest differential operator with conformal properties is the conformal Laplacian L_h:= -\Delta_ h +\frac{n-2}{4(n-1)}R_h, and its associated curvature (which is precisely the scalar curvature R_h). It gives rise to interesting semilinear equations with reaction term of power type, such as the constant scalar curvature (or Yamabe) equation

The Yamabe problem has been one of the multiple examples of the interaction between analysis and geometry.

A higher order example of a conformally covariant operator is the Paneitz operator, which is defined as the bi-Laplacian (-\Delta_h)^2 plus lower order curvature terms. Being M a Riemannian manifold with a Riemannian metric h, these operators belong to a general framework in which on the manifold (M, h) there exists a meromorphic family of conformally covariant pseudodifferential operators of fractional order

P_h^s will be called the conformal fractional Laplacian. The main goal of this course is to describe and to give some examples, applications and open problems for this non-local object.

We will explain the construction of the conformal fractional Laplacian from a purely analytical point of view. Caffarelli and Silvestre gave a construction for the standard fractional Laplacian as a Dirichlet-to-Neumann operator of a uniformly degenerate elliptic boundary value problem. In the manifold case, Chang and the lecturer related the original definition of the conformal fractional Laplacian coming from scattering theory (in four-dimensional gravitational Physics) to a Dirichlet-to-Neumann operator for a related elliptic extension problem, thus allowing for an analytic treatment of Yamabe-type problems in the non-local setting.

The facilities of IML are awesome for this sort of events. The Institute is located in a very quiet area, close to a small village with basic facilities and well connected with Stockholm. The rooms and bunkers are lovely, very well-equipped. The new building with the seminar room is also nice; the shared kitchen next to the seminar room facilitates socialization and favors discussions in the nearby blackboard room. Of course, the main building—Mittag-Leffler’s former house—is simply amazing, and it definitively invites to retreat, study, reflection, work, and collaboration. We are also grateful to the administrative staff for their efficiency and support. 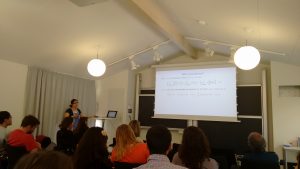 The participants of the Summer School, especially the junior ones, were happy to be given the opportunity to present their work. The relatively small size of the meeting ensured that they found themselves confident enough to discuss with each other.

Recent research topics in the field of Nonlocal Equations were presented by both experienced and young researchers. The social dinner and other communal activities ensured that the participants had the chance to get to know each other. A barbecue was organised on Tuesday. Wednesday afternoon was free several options for social activities were suggested (trips to the city center, a boat tour, visiting local museums).
Finally, the was a social dinner on Thursday, also supported by the Institut Mittag-Leffler itself.