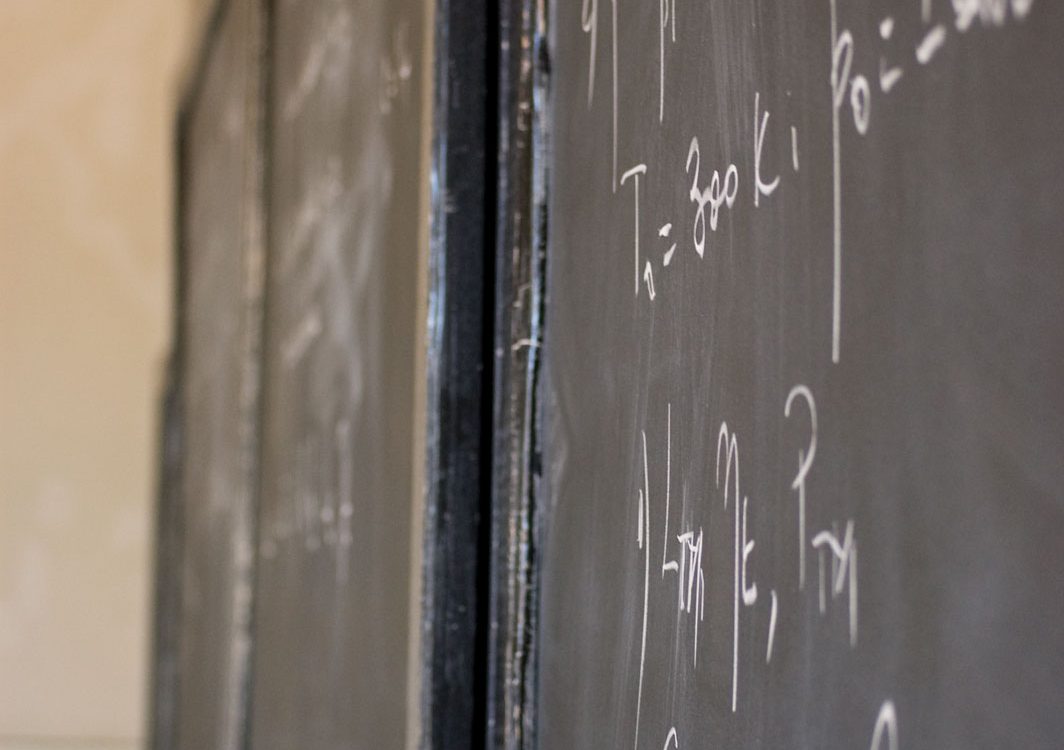 Counteracting the underrepresentation of women in mathematical physics

Whereas in the early 20th century, physicists would typically turn to mathematicians for technical advice, these later strongly benefitted from the advances of quantum field theory and string theory as can be seen from various standing mathematical conjectures motivated by physics. The links between physics and mathematics have become so strong, that some fields of research have developed at the very threshold between these disciplines, where distinguishing between the mathematical and physical input has become artificial if not impossible. Two meetings that brought together women mathematicians and physicists working in these areas were recently organised, both aimed at identifying new trends of research at the frontier between mathematics, quantum field theory and string theory and exploring how they intertwine.
A first meeting “Women at the Intersection of Mathematics and High Energy Physics” held 6-10 March 2017 at the MITP in Mainz, was organised by Gabriele Honecker (JGU Mainz), Kasia Rejzner (Univ. of York), Katrin Wendland (Univ. Freiburg) and myself.
A second meeting entitled “Women at the intersection of mathematics and theoretical physics” organised  by Elli Pomoni (DESY, Hamburg), Jörg Teichner (DESY, Hamburg) and myself (Univ. Potsdam and Clermont-Auvergne), which gathered some thirty women working at the frontier of mathematics and physics, took place at DESY Hamburg from April 9th to April 12th 2018.
Both meetings triggered interactions across fields in bringing together women mathematicians and theoretical physicists working at the forefront of research topics in mathematical physics. There are still very few women working at the threshold of mathematics and physics, even if some very active distinguished women scientists are opening the way to the younger generation. This regretful scarceness of women working in those interdisciplinary fields forces a broad spectrum of topics when bringing them together. We view this as a strength, for it encourages interactions beyond the ones a scientist is used to with colleagues working in closely related topics. Amongst the speakers in Hamburg were Shabnam Beheshti (Queen Mary, London), Agnese Bissi (Harvard University), Alexandra Castro (Amsterdam University), Johanna Erdmenger (Wurzburg University), Susanne Reffert (University of Bern), Kasia Rejzner (University of York), Claudia Scheimbauer (Oxford University) and and Ulrike Tillmann (Oxford University).

In view of the diversity of the audience, the talks of the workshop in Hamburg entailed a substantial pedagogical component. These were delivered with the goal to teach each other, stimulate interactions and to foster possible collaborations between the participants, as well as to motivate the younger generation to enter these fields of research. Beyond their scientific impact, we also hope this type of workshop can offer an opportunity to envisage new patterns of sharing research in an inclusive manner with ethics geared by generosity rather than exclusively by excellence criteria that follow today’s excellence scheme oriented trend.
During an informal evaluation of the meeting in Hamburg, participants made useful suggestions to keep in mind for future mathematical physics meetings for women, such as to encourage small projects between participants of “Women and mathematical physics” meetings in a similar way to the “Women and topology” meetings and to organise interdisciplinary discussions during the meeting on topics that reach out across fields such as (to name a couple of examples) duality, locality, (super) symmetry, etc.

In the second workshop in Hamburg, we furthermore organised two roundtable discussions related to women/gender issues in mathematical physics, trying to pinpoint the problems specific to such interdisciplinary fields of research and to search for possible solutions/actions specifically aimed at the younger generations. The aim was to

Among the issues raised during the discussion were problems specific to areas at the threshold between mathematics, theoretical physics and mathematical physics such as
the lack of female role models in theoretical physics, very few women physicists (interestingly, Lisa Meitner didn’t benefit from the recognition received by Otto Hahn who got the Nobel prize);
the fact that topics in mathematical physics are often risky and new, so there is no set path to follow as a young researcher. In mathematical topics, like topology, one sees more women at conferences (some 30 %), in topics like axiomatic quantum field theory, hardly any.

Here are further observations collected during the discussions:

Possible concrete actions that were suggested are to:

A summary of the panel discussions shared on the EWM network triggered interesting comments after the meeting:
Are researchers as likely to pick up and run with a new idea that a woman came up with as they would be to run with an idea come up with by a man?  If this is not the case, then “men come up with the most influential new ideas” becomes a self-fulfilling prophecy and one can wonder whether this is why women often chose by preference to work in established areas that the community has already decided are interesting;
Going through a training scheme on gender issues in order to get tenured was strongly approved by some. As a matter of fact, in Oxford, even for interviewing prospective candidates for the undergraduate course, the academic staff need to undergo some training sessions (about gender and disability issues, e.g.).
The unbalance in the representation of women in the different fields of mathematics has long been observed and particularly regarding mathematical physics. A recent paper addresses these or related issues. This topic is also at the center of the project “A Global Approach to the Gender Gap in Mathematical, Computing, and Natural Sciences: How to Measure It, How to Reduce It?”

All these discussions speak for the need to bring together women academics working at the threshold of mathematics and theoretical physics, as they offer an opportunity for them to share their experiences, their knowledge and gain in visibility. Such meetings encourage

Following the meetings in Mainz in 2017 and in Hamburg in 2018, Kasia Rejzner (York), Xenia de la Ossa (Oxford), Susanne Reffert (Bern) , Anne Taormina (Durham) and myself are planning to organise the third meeting of this kind, possibly in Bern, Switzerland.