Karen K. Uhlenbeck: the present and the future of mathematics 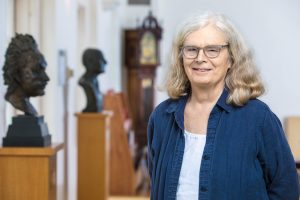 Karen Uhlenbeck’s contributions to mathematics, in particular to the field of partial differential equations and geometric analysis, are unquestionably among the most impressive of the last several decades. Her influence on the modern mathematical thought is multifaceted, by direct contribution of foundational results, and by the ripple effect of her work. From first hand experience, I can attest that her way of looking at mathematical realities, made them appear as very concrete, like an almost palpable landscape. My former collaborator and colleague Thomas Otway (who sadly suddenly passed away in 2016, and who was at UT as part of her team in the late eighties) used to say: “If you talk to her about our work, write down what she says. If it doesn’t make sense to you right away, it will later”. Karen is humorous and ironic. She once said almost verbatim: “The hardest mathematical ideas are not something one truly understands. One day one simply accepts them”.

Of the many contributions of K. Uhlenbeck’s, I will only highlight some, related to the analytical aspects of gauge theories and to the theory of partial differential equations.

Reminiscing about the good old times. Shortly before I gave a talk for the Abelprijs Symposium at the KNAW, Karen and I talked about fond memories of Chicago and Austin. When she moved to Austin, her Chicago students, Daskalopoulous, Bradlow, and I, followed her. We were enjoying our warm welcome to the new place (some of us still missing the Chicago life). People were competing for Karen’s attention, especially during lunchtime, but she made sure that her students had a “reserved spot”. Karen believed (and still does) that students should receive your undivided mathematical attention during their dedicated meetings, and should be independent afterwards. She scheduled weekly meetings so that we each received our share of mentoring. In one of her visits, her friend Leslie Sibner said to her in disbelief: “Did you really assign her the Dirichlet problem for Yang-Mills as a “warm-up” problem?”. That ended up being my dissertation (I never summoned the courage to ask what the follow-up problem was supposed to be). A fond memory is when she said to me: “Now, you do sound like a mathematician”. Something a graduate student in mathematics should strive for. 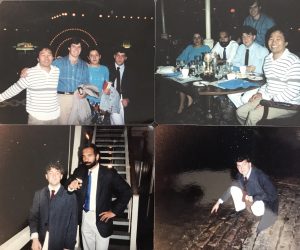 A true feminist. Karen is a true feminist, one who invented her unique way of doing mathematics, as a person and as a female. About Texas she said: “It was good for me. At the time, there were many strong-willed women around: Ann Richards, Liz Carpenter, Barbara Jordan, just to name a few …”. One of the first things she did when she landed at UT was to institute a women luncheon among the faculty.

An analyst at heart. When I asked her about her favourite result, she said: “I am a PDE person” and she mentioned one of her first papers (Acta Mathematica, 1977), in which she proved smoothness of solutions for a class of non-linear elliptic systems. Those, depending on the context, describe a variety of phenomena and geometric objects (compressible flow, Born-Infeld equations, etc. ). In the universal language of differential forms, they can all be reconducted to the non-linear Hodge equation for p-forms.

A note on the Abel Prize. Karen can count many outstanding achievements in her career. Nevertheless, I was particularly moved when I knew that she was the first woman to be awarded the Abel Prize “for her pioneering achievements in geometric partial differential equations, gauge theory and integrable systems, and for the fundamental impact of her work on analysis, geometry and mathematical physics”. Other recipients, whose areas of expertise are to various extents related to hers, are Louis Nirenberg (who sadly passed away this year), John Nash, Michael Atyah, Peter Lax, John Milnor, Lennart Carleson, Isadore Singer. The Abel prize has always recognised the role of foundational areas of mathematics, both per se and for their applications to other fields. Nowadays it is known that foundational areas have applications also in new areas of technology (such as artificial intelligence and, data analytics, to name a few).

A founder of modern geometric analysis. Karen Uhlenbeck is to be numbered among the very founders of modern geometric analysis, a field involving “intriguing combinations of ideas and techniques from several different fields, including algebraic geometry, differential geometry, topology, and partial differential equations” (T. Parker). In that blessed marriage between geometry and analysis, tools mostly from elliptic partial differential equations are used to establish results in differential geometry and topology; vice versa, the latter brings essential insight to the former. (Perhaps among the older examples is the work on Linear Hodge Theory by Sr. W. V. D. Hodge, in which a relation is established between cohomology groups on a Riemannian manifold and harmonic forms). For a very long time though “geometric analysis” was not defined as a field in itself.

With regards to the analytical aspects of gauge theories, the Yang-Mills equations, introduced in 1954 as a non-linear extension of Maxwell’s equations, have been instrumental in the eighties and nineties to the creation of beautiful mathematics (the construction of Donaldson’s invariants which, together with the Freedman-Casson machinery, brought to the discovery of infinitely many differentiable structures on R^4, called “exotic” structures, the results by Fintushel and Stern on homology three-spheres, etc.). Two papers Uhlenbeck published back-to-back in Communications in Mathematical Physics in 1982, namely “Removable Singularities in Yang Mills Fields”, and “Connections with Lp Bounds on Curvature”, were very influential at the time and still are now. A later article (1989), “Solutions to Yang-Mills equations that are not self-dual”, which she co-authored with Leslie and Robert Sibner is referred to as a “landmark paper” by its reviewer Ian Segert. Indeed, ever since the late seventies, the analysis of the Yang-Mills energy function as a Morse function and knowledge of its critical points has been regarded as an important area of research by most of the well- known geometric analysts and topologists, who worked on analytical Yang-Mills (Uhlenbeck, Taubes, Atiyah, Bott, Hitchen, Singer, Bourguignon, Lawson, etc.). Those who remain active, still think that this is an important ground for future investigation. In a recent conversation, Karen said humorously “I still don’t understand the topology”.

On a related matter, Yang-Mills connections in four dimensions and harmonic maps in two dimensions present striking similarities. In both cases the action functionals are conformally invariant, and the so-called “bubbling” may occur. With Dirichlet boundary data on suitable domains, the existence of large harmonic maps in 2 dimensions relates to that of large Yang-Mills fields in 4 dimensions. Such analogies and the establishment of the prize for the solution to the “mass gap” millennium problem (upon which the validity of the standard model depends) are perhaps reasons why harmonic maps specialists have recently been taking a greater interest in the Yang-Mills equations.

It would be surprising, if Uhlenbeck’s compactness theorems, and her contributions to geometric analysis did not play a significant role in the solution of very hot open problems in the near future.

A note of gratitude. Even by answering a question regarding a simple PDE problem on a disk, Karen would raise the problem up by several levels and frame it in the context of complex Grassmannians, before the eyes of incredulous graduate students. I am grateful to have had the unique opportunity of knowing true mathematical greatness, through an extraordinary human being, at a very special time and place.