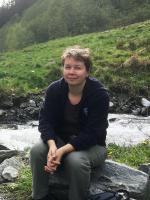 Elena Resmerita is an associate professor at the Alpen-Adria Universitaet Klagenfurt, Austria. She studied Mathematics in Iasi, Romania and obtained her PhD in 2003 from the University of Haifa, Israel. She has been a postdoc at the Radon Institute of the Austrian Academy of Sciences and at the J. Kepler University in Linz. She was a recipient of an Elise Richter award from FWF – the Austrian Science Fund and had longer research stays at IPAM (University of California at Los Angeles), IMPA (Rio de Janeiro), Fields Institute (Toronto).

Her research interests are in Inverse Problems and Continuous Optimization.

EWM: “Math is the only place where truth and beauty mean the same thing” said Danica McKellar in one of her books. What does mathematics mean to you and how did you decide to pursue a career in this area?

Mathematics means to me first of all numbers, which fascinated me since early childhood. Then it means a very structured thinking, creativity, and last but not least, a way to connect to a cosmopolitan world with a common language. I feel myself ‘at home’ whenever I am around a university or a research institution. I was oscillating between studying medicine and languages, when I finally had to be honest with myself and had to admit that Math was the easiest topic for me in school, the one that kept me interested for hours. So I enrolled as a math student in the A.I. Cuza University of Iasi, Romania (my home town). At first, I decided to be a math teacher, since I liked to work with children (as a first-year student, I used to give private lessons to younger pupils). At that time, I was not aware that one can do something else with math than teaching in schools. In Romania it was (and still is) not easy to get a teacher job at a school in a big city – there is an annual selection exam and the competition is tough. After graduation, although I obtained a very good grade in the selection, I could only get a job as caretaker for children in an orphanage in the city. There was no math involved there, and after a month I started fearing that I would forget everything I had learned in the university. So I began to study for a Master and soon I was asked by my Bachelor thesis supervisor, professor Anca Precupanu, to hold classes of analysis at the university. She was the one who encouraged me to pursue an academic career.

EWM: What is the topic of your research and which are the mathematical questions that interest you presently?

Short answer: Various aspects of regularization of inverse problems and Continuous optimization. Longer story: My PhD thesis developed fixed point approaches to some classes of convex feasibility, optimization and equilibrium problems, as well as of some linear operator equations. My PhD supervisor, (the late) professor Dan Butnariu advised me to complement my knowledge during my postdoc years by learning something new. This is why I started to work in the group of an expert in inverse problems: Heinz Engl, at the RICAM institute in Linz, Austria. Such problems are usually ill-posed, that is, small oscillations in the data can lead to large perturbations when computing the solution. Numerical differentiation, image denoising and deblurring or parameter identification problems are just some examples in this sense. I have been mostly concerned with stabilization methods for such problems, i.e., methods which have to take care of delivering solutions which are as accurate and stable as possible. Most of my research addressed linear ill-posed problems in Banach spaces, with the aim of denoising images, recovering sparse solutions or nonnegative solutions (e.g., probability density functions as solutions of integral equations of the first kind). Right now I’m working on the nonnegative solutions topic, which is not as simple as it sounds and continues to challenge me.

EWM: You had the opportunity to get acquainted with the academic world in different countries: Romania, Israel, Austria. Could you share with us some of your experience regarding the funding opportunities and support for women wishing to follow a career in mathematics in these countries?

I left Romania quite early, so I am not up to date with the funding situation there. But only from looking at the websites of mathematics departments there, one can see a lot of women mathematicians at all academic levels. Israeli universities offer scholarships for PhD and for senior fellows on a regular basis, many of them being based on funding from donations. The Austrian Science Foundation (FWF) can finance research projects for women at early postdoc stages, called Hertha Firnberg projects, and at late postdoc stages towards habilitation, called Elise Richter projects. I was granted an Elise Richter project about ten years ago. I can say that this prompted one of the most beautiful and productive times in my professional life.

EWM: You have a nice family: three children, a husband and, probably, a dog. How hard was it to keep everything working and what can you say about the help you received from your personal and job environment?

We are still discussing about the dog. It has not been easy to get here, especially when the children were babies, toddlers and one was not able to sleep enough. But the best things in life seem to come in a package with the most work, so that is fair enough. You know, it becomes a routine after a while: wake up early, try to get well organized during the day (who does what, when exactly) – this is the theory, of course. Now the children are not so small and can help at home. The main support has been my husband, a computer scientist who also works in academia and thus understands this way of life. It helps that we go back together a long time. As for the job environment, I am lucky to be part of an institute where people are very familiar with each other, regardless of their job descriptions. Everyone is willing to discuss any professional issue in detail, in order to help in finding a solution. I appreciate that we have fun together, hiking, running, or just sharing some cake at the institute.

EWM: Young people striving for a career need guidance. Could you recommend our readers some mentoring programs in mathematics?

As far as I know, many universities offer mentoring programs for their PhD students and postdoc researchers, also in collaboration with external partners – I can name here the one at my university, which is called “Young Scientists Mentoring”. One should take advantage of such opportunities, since it helps at least to obtain international feedback on the topics one is working on, and to get closer to the corresponding scientific community. One could benefit from more or less official mentoring also via senior researchers that one meets at scientific events and especially via the collaborators of the (former) PhD advisor. There are still other mentoring possibilities, like the one that EWM plans to offer starting with 2017. EWM will make this public soon, and we hope that colleagues interested to be mentored or to act as mentors will answer the call.

EWM: How did you get involved in the activity of EWM and what do you think it has achieved in the last years by this organization?

I searched the Internet for an association in Europe similar to the AWM in the USA, after incidentally attending at a conference in the USA an event organized by AWM, which I enjoyed very much. I was happy to find it. Moreover, I got immediately involved, as the EWM convenor at that time, Frances Kirwan was looking for newsletter editors. This organization has grown very diversely each year – it is enough to look at the webpage and at the newsletters to have a short overview of its activities.

In my opinion, EWM is actively pursuing its main aims, which are giving young women confidence to continue their Math studies as far as possible, and making women’s’ achievements more noticeable in larger Math communities. We address the former by, e.g., organizing summer schools, presenting portraits of interesting female researchers in Math, and providing useful information on women in Math by countries. The latter is approached by, e.g. answering calls from special committees on prize or plenary speaker nominations. Lately, Carola Schönlieb and I, together with enthusiastic long-standing and newer EWM members, have been working also on the administrative part concerning membership  and fee collecting. Currently, we are focusing on developing a mentoring system within EWM (an older idea in this context) and on attracting funds to support a number of conference travel grants for members at the beginning of their careers.