The European Girls’ Mathematical Olympiad (EGMO) is an international mathematics competition similar in style to the International Mathematical Olympiad. The EGMO was initiated by the United Kingdom, where the first edition took place in Cambridge in 2012. The contest entails two papers, each consisting of three problems, taken on consecutive days. Participating countries send teams consisting of four female mathematicians of school age. The EGMO was created to encourage more girls to discover and further develop their mathematical talent. The contest not only offers these girls the opportunity to excel at an international competition level, but also to meet other girls with a talent for mathematics. Both the competition and these encounters can contribute to these girls developing their mathematics talent and choosing, for example, a specialisation in science.

EGMO 2020 was planned to be held in the Netherlands, in Egmond aan Zee to be more precise, but took place as a purely virtual event because of the COVID-19 pandemic. In this report, we will tell more about this event and about how the transition to an online event and remote competition worked out.

Three years ago, we started our preparations for EGMO2020: building up the organisation, getting the support of the Ministry of Education, Culture and Science, looking for sponsors and other funds, launching a preliminary website. At the beginning of March, we were ready for hosting more than 500 people in hotel Zuiderduin in Egmond aan Zee. Our Logistics Committee had everything ordered and ready: backpacks with EGMO2020-logo serving as goody bags, bloc-notes, water bottles, 15 000 sheets of contest paper. The medals were on their way from China. Some members of the EWM-community would have helped as coordinators; their main task would have been correcting the work of the contestants on a particular problem and checking the marks with the leaders of these contestants. Apart from these 40 coordinators, more than 140 other volunteers would have been involved, as team guide, invigilator, crew, or organiser, to make sure the whole event would run smoothly for the more than 200 contestants and their 120 mentors.

On 13 March we had to take the decision to cancel the physical event. As Organising Committee, we took some time to come up with a plan B. Cancel the present edition of the EGMO and host it in another year? Postpone the present edition until September? Or turn it into a virtual event? On 25 March, exactly three weeks before the start, we decided for this third option. Our main motivation was that it was far from sure that we could organise a physical event just a couple of months later, while at the same time more than 200 girls all over the world had qualified themselves to participate in this year’s EGMO, not next year’s.

Naturally, this implied that in this year’s EGMO everything would be different. Many of the participants were

encountering difficult times, being locked in their houses, worrying about relatives or friends. We did not ignore this background; this was the state of the world and all of us (contestants, leaders and organisers) had to deal with it. We are happy our sponsors kept supporting this new form of the EGMO. 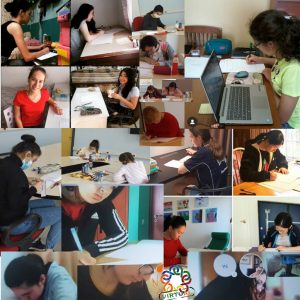 Our Ceremonies Committee turned the Opening and Closing Ceremony into very sparkling virtual versions. The team parade for the Opening Ceremony consisted of pictures that all delegations had sent in beforehand, yielding very creative contributions. Tom Verhoeff presented a lecture on Lehmer’s dance, a theme that would have been present in the real Opening Ceremony as well. In the Closing Ceremony, Dutch minister of Education, Culture and Science Ingrid van Engelshoven encouraged participants to keep developing and enjoying their talent.

For the contest itself, many contestants sat the papers at their homes, one of their parents being in charge as invigilator under the responsibility of the team leader. After having received the scans of the participants’ work, the leaders and deputy leaders could start marking the scripts. Our coordinators – still 20 coordinators were involved – came up with very elaborate marking schemes. Moreover, we had set up a forum on which leaders could ask questions, e.g. about how to mark certain scripts or how to interpret the marking schemes. The forum has been extensively used and played an indispensable role in the quality of the marking process.

After the contest, we organised a lot of online activities, such as a virtual visit to the flower gardens of the Keukenhof (a physical visit was planned in the original set up), a nail art challenge, a cube mosaic design contest and a bingo. For this bingo, contestants had to reach out to others, for instance via Instagram or using the contestant forum. Interviews with contestants were published on our YouTube-channel and our website, contestants could submit their favourite song to a radio EGMO playlist, and one of our sponsors organised a live chat with contestants. For an impression of the whole week, take a look at our compilation video on our YouTube-channel.

We hope that this year’s EGMO, although far from what everybody originally had been expecting, has brought some happiness. We believe that working on the extremely challenging maths problems was a nice distraction in these difficult times and that meeting other contestants and staying in touch via social media was fun (although not the same as physical encounters). We are very happy to have received so much positive feedback about the fact that EGMO was able to go on in this way and how we turned it into something to remember.