In November 2018, 36 women in operator algebras met at the Banff International Research Station (BIRS) to collaborate in small groups on open research problems in the field. The workshop was a success by any metric: research questions were refined, theorems were proved, and professional networks were extended and strengthened.

In light of these low participation numbers and inspired by previous “Women in …” workshops such as Women in Number Theory, Astrid an Huef (Victoria University of Wellington), Sarah Arklint (University of Copenhagen), Karen Strung (Radboud University), and Dilian Yang (University of Windsor) applied to hold the first Women in Operator Algebras Workshop at the Banff International Research Station (BIRS). The application was successful, and BIRS provided all accommodation and meals, and very good working facilities. We also received some funding towards the cost of travel for some participants from the NSF-HRD 1500481 — AWM ADVANCE grant and from the Compositio Foundation. We are very grateful for all the support we have received.

Prior to the workshop, the women organized themselves into teams focusing on a research question to which they could contribute. The research groups were: 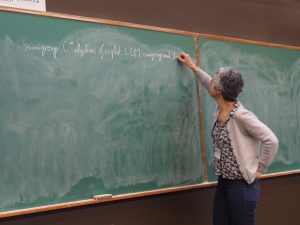 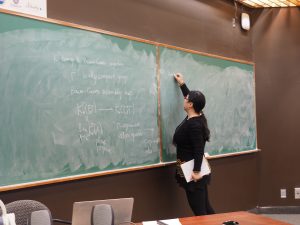 Dr. Wang explaining the project she will lead

Most of the workshop was spent working in these small groups, but on Monday and Friday each small group gave a 10 minute presentation to all participants on their project and progress. 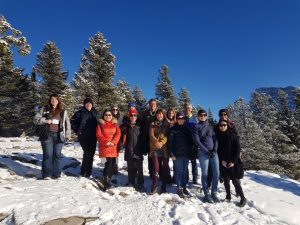 Happy hikers at the top

Participants also took advantage of the location for a group hike up Tunnel Mountain and a visit to a current art installation by Young Joon Kwak at the Banff Center called “The Cave” which works with the themes of the man cave, the body, heteronormative culture, and national parks. One evening was devoted to a group discussion facilitated by Carla Farsi (University of Colorado (Boulder)), Ying-Fen Lin (Queen’s University Belfast), and Jacqui Ramagge (University of Sydney) on the issues faced by women in mathematics in general and in operator algebras in particular.

Several of the groups were so pleased with their progress and prospects for future success that they have already made arrangements to meet again.

This article originally appeared on page 20-21 of the January-February 2019 issue of the newsletter of the Association for Women in Mathematics.