Conference on Women in Uzbekistan

ACTUAL PROBLEMS OF MATHEMATICS AND MECHANICS

The aim of the conference is to establish scientific relations with the cooperation of women experts in the field of mathematics and mechanics as it is considered as the most active research area in our republic & to support collaboration between them.

The next aim of the conference is to work with the world mathematicians, foundation, associations, and to introduce Uzbek women experts with the mathematical associations (IMU, CWM, EWM, OWSD, and …)

The conference was aimed at the implementation of scientific and technical programs in priority areas of science (Pure and applied mathematics and information technologies), the further strengthening of international scientific cooperation, the involvement of women scientists in this field of science and the promotion of their ties with leading experts in this area. Participation in the conference of young scientists, specialists, interns, researchers and undergraduates from Urgench State University, and also from universities of the republic Central Asia Countries was envisaged. 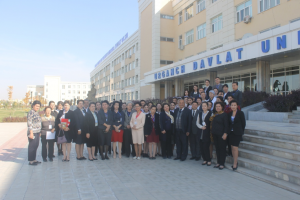 During the conference, in addition to sectional and plenary reports, the following discussions were organized: WORLD WOMEN IN MATHEMATICS: Bakhyt Alipova, International Information Technology University and Muhabbat Rakhimbayeva, Urgench State University, in particular, made a presentation on the TV (Uzbekistan).

A collection of theses and a conference program were published, which includes 66 theses 97 authors (96 p.).

We talked about the problems for defending a second degree (for full prof. position) in our and other countries of CA. The problem of women is that they could not participate in events, to write propose projects, and participate in scientific societies; to provide more travel and research grants and scholarships. It depends on, they have not enough:

On the other side, she is a woman. Role models play a role in these, experiences such as balancing family, career, research and responsibilities. And also during the conference professor participants talked about the history of the development of their career and the role of the family in this.  We discussed how to develop courage and self-confidence in this. Here is very important for having networks organize special conferences, workshops for women mathematicians.