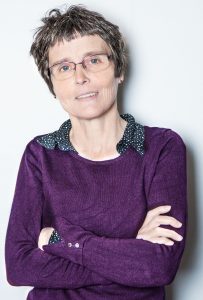 On 11 February 2019 Professor Claire Voisin has received the L’Oréal-UNESCO International Award For Women in Science, “for her outstanding work in algebraic geometry. Her pioneering discoveries have allowed to resolve fundamental questions on the topology and Hodge structures of complex algebraic varieties.”

Claire Voisin is a French mathematician and world leader in algebraic geometry; in her career she has given several outstanding contributions to different areas in the field, such as Noether-Lefschetz theory, Chow groups, syzygies of projective curves, stable rationality and the Lüroth problem; some of her best known results are in the Hodge theory of projective and Kähler manifolds. With her ideas and  techniques, ranging between algebra, topology and geometry, she has been able to solve some longstanding open problems, and to give rise to new lines of research.

Let us enter into the subject and briefly describe one of her results: the solution of the Kodaira problem, at the heart of the topology of complex manifolds.

There is a classical intermediate notion, that of Kähler manifold, which is a compact complex manifold admitting a special metric, called a Kähler metric; every projective manifold admits such a metric. By Hodge theory, the cohomology algebra of a Kähler manifold satisfies some special properties. Since the cohomology algebra is a topological (in fact, homotopy) invariant, this gives topological obstructions for a compact complex manifold to admit a Kähler metric.

In dimension two, there are Kähler surfaces which are not projective, but Kunihiko Kodaira proved in 1960 that every compact Kähler surface is homeomorphic to some projective surface, so that the obstructions to projectivity are not of topological type. The Kodaira problem asked whether the same holds in higher dimension.

In a paper published in Inventiones Mathematicae in 2004 Voisin gave a negative answer to this question, in every dimension at least 4. She showed that the cohomology algebra of a projective manifold satisfies some additional properties, and gave examples of Kähler manifolds (in any dimension at least 4) that do not satisfy these properties. This shows that such manifolds cannot be homeomorphic or even homotopy equivalent to any projective manifold.

Born in 1962 near Paris, Voisin studied at the École Normale Supérieure in Paris. In 1986 she got her PhD at Orsay, under the direction of Arnaud Beauville, and entered the Centre national de la Recherche Scientifique (CNRS). She became Directeur de Recherche in 1995, at the Institute of Mathematics of Jussieu. In 2016 she joined the Collège de France, where she holds the chair of algebraic geometry. Voisin won several prestigious awards, including a prize from the European Mathematical Society in 1992, and in 2016 the CNRS Gold Medal, France’s highest scientific distinction: she has been the 6th mathematician to receive it (after Borel, Hadamard, Cartan, Serre and Connes). She gave plenary lectures at the European Congress of Mathematics in Stockholm in 2006, and at the International Congress of Mathematics in Hyderabad in 2010. These are only a few of the many recognitions of her outstanding research activity. Voisin is also a mother of 5 children, and has 3 grandchildren.

Voisin is very generous in sharing her ideas and knowledge, and has become an icon and a role model for a whole generation of algebraic geometers, young women and men moving their first steps in science. When it comes to gender issues in mathematics, she believes that “in science there is a cliché which still prevails, that women are not very gifted for abstraction.” At the awards ceremony, held on 14 March at UNESCO’s Headquarters in Paris, she thanked the L’Oréal Foundation for its action in favor of women’s access to the world of science. She dedicated the award to her two granddaughters, “with the wish that they know a world where we do not speak any more of female scientists, but just of scientists, without gender considerations” (translated from French).

The program “For Women in Science”, now at its 21st edition, has been created in 1998 by the L’Oréal Foundation in partnership with UNESCO. Besides many fellowships for doctoral and postdoctoral female researchers, every year five International Awards are conferred to outstanding female scientists, working in the five different regions: Africa and the Arab States, Asia-Pacific, Europe, Latin America & North America. Each Laureate receives €100.000.

The research themes for the Awards are, in alternating years, Life Sciences or Physical Sciences. This year, for the first time, Mathematics and Computer Science have joined Physical Sciences. These Awards can be very effective in promoting outside the academic world both the role of mathematics in our society and the role of women in top-level mathematical research. One example: if you have been at Charles de Gaulle airport this spring, you may have seen some big posters on 2019 L’Oréal-Unesco Awards, in particular one with the picture of Claire Voisin, Laureate for Europe, and the program motto: “The world need science. Science needs women.”

For more reading (and listening) on Claire Voisin and her work:

Three Bourbaki seminars on her work: