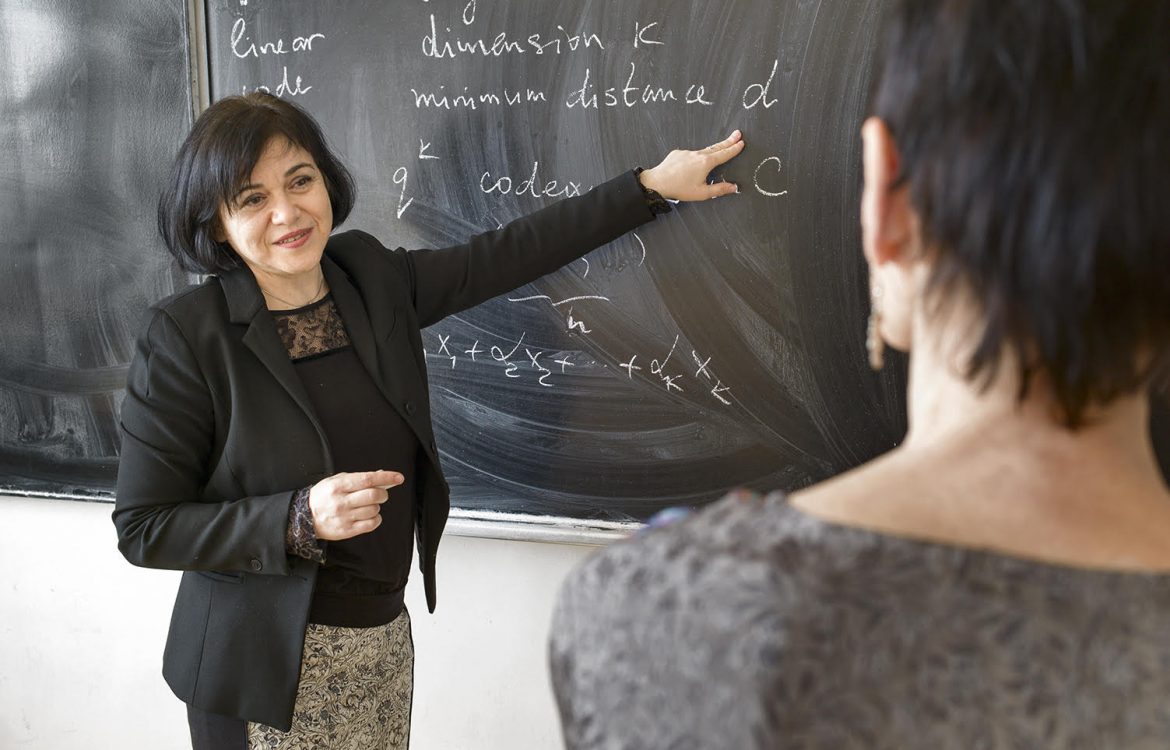 This is an EXCERPT of the interview from the catalogue “Women of Mathematics Throughout Europe, a Gallery of Portraits”, published in Verlag am Fluss 2016, info@verlag-am-fluss.de, and featured among thirteen portraits in the corresponding exhibition http://womeninmath.net. See also the EWM newsarticle.

Were you encouraged by your family, friends or by other people around you in choosing to do mathematics?

My father, who believed every child had some talent and made a point of encouraging the child in developing this talent, spotted my gift for mathematics and encouraged me in that direction. He also encouraged my sister, who enjoyed painting and drawing from a very early age, in doing arts.

Another person who was supportive throughout my career is my husband, whom I met at university, while studying. He has always encouraged me to do research and we’ve actually also worked together on several occasions. (…)

The political situation and particularly the “transition period” (in the 1990s) from a socialist to a capitalist economy, made things difficult for us. A couple of years after we arrived (in 1988) at the Academy of Science in Veliko Tarnovo, the institute went through some restructuring and a new focus was made on mathematics applied to computer science. Whether I could keep my job while continuing to do research in pure mathematics was then unclear. So in 1992, I decided to move to the University of Veliko Tarnovo and my husband chose to stay at the Academy; this way, I could go on with my research in pure mathematics and the risk of both of us losing our job simultaneously was avoided. (…) Another obstacle we came across was the lack of access to articles; at the time, Prof. Dodunekov would help us by bringing back articles and books from his travels. Having access to articles is still a problem today; we do not have free access to the publications of some publishing houses, as one does in Western European Universities.

In retrospect, are you happy to have chosen mathematics or do you have some regrets? For you, what are the joys of mathematics? What are the hardships?

I have no regret whatsoever; what I like about doing mathematics is that it is so creative. I enjoy meeting other mathematicians, discussing and working with them, even though I also enjoy working on my own. Another feature of mathematics I like very much is that it is common to the whole world, and insensitive to politics. It is a universal language.

Mathematics is however a challenging subject by which we attempt to solve arduous problems. If ever I feel discouraged when faced with a difficult problem, I tend to look at another problem, which sometimes helps me to attack the original one from a different angle. So all in all, I do not view mathematics as a tough subject; it is hard for people who do not understand it because they lack the basics.