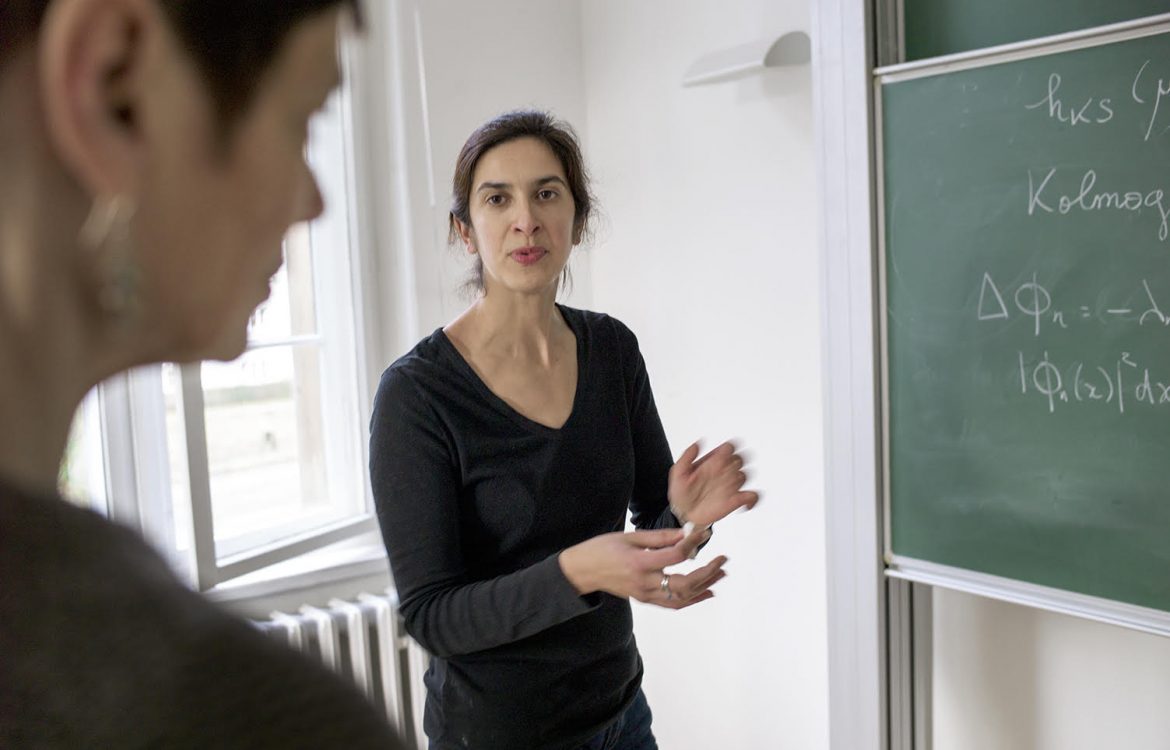 This is an EXCERPT of the interview from the catalogue “Women of Mathematics Throughout Europe, a Gallery of Portraits”, published in Verlag am Fluss 2016, info@verlag-am-fluss.de, and featured among thirteen portraits in the corresponding exhibition http://womeninmath.net. See also the EWM newsarticle.

For a long time, I did not think of the difficulties involved in being a woman doing mathematics. Only as I was preparing my PhD thesis, did I realise how few women there were at conferences, without being particularly affected by this fact. Now that I have children, I wonder more about these issues and realise the differences in the ways women and men view their career. Sharing with my male colleagues the questions that come to my mind, such as the difficulty to come back to mathematics after a maternity leave, is difficult, if not impossible. After a child’s birth, men intend to go on working as before, when women are ready to reorganise their schedule and to dedicate less time to research. Having received prizes, at the time my children were born, it was expected that I would get back to research straight away. However, during my maternity leave, topics on which I was working were the object of research, and led to publications I was not invited to join.

In retrospect, are you happy to have chosen mathematics or do you have some regrets? For you, what are the joys of mathematics? What are the hardships?

I am happy to have done mathematics. I nevertheless find it difficult not to be able to share my interest with my family. Were I to choose a career now, I think I would choose medicine. Medicine incorporates a human component which I somewhat miss in mathematics, particularly since I like working on my own. The human aspect of teaching provides a little compensation for this lack. In my professional activity, I enjoy the freedom we feel in understanding things. Doing mathematics is a creative work, that emanates from my person, which another person would not have done in the same way. In doing mathematics, I express something personal. It is a source of joy to know that, despite this personal aspect, the fruit of my work can be of interest to other mathematicians. It is a privilege to create beautiful things without having to worry about their applications. I regret however not being able to be directly useful in a world where terrible things happen, not being in a position to repair the evil committed by others.

What would you recommend to a young woman in your country wanting to start a career in mathematics?

I would recommend that she follows her own ambitions and is not influenced by what she hears around her. She should not hesitate in being self-demanding and in setting herself ambitious goals, even if neither her parents nor her professors do so. I would like to add that there are various ways of “being good” at mathematics; you do not necessarily need to be quick, as one might expect from the existing encouragement to take part in the Olympiads. Taking the time to understand things in depth is also a way to do research. Neither should one feel obliged to talk in public, say in a seminar. One should have enough self-confidence to assert one’s own certitudes, not let oneself feel discouraged or impressed by others, for example by colleagues who very bluntly claim that a result is trivial. The result might not be as evident as they say it is. I would also tell a young woman that the career of a mathematician is rather well suited for a woman; of course it requires a lot of work but it provides some flexibility, since one can organise one’s work. Right now, the scarceness of positions penalises women. I nevertheless do not see how one can think that a career as a mathematician is not appropriate for women. When I attended a meeting of women mathematicians in India, I realised that their problems are rather different from ours.