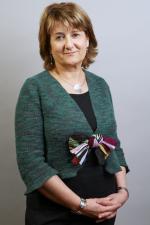 Marta Sanz-Solé is Professor at the Faculty of Mathematics, University of Barcelona, and the leader of the research group on stochastic analysis at this University. She has influential work in a variety of branches of stochastic analysis, including anticipating calculus, large deviations and especially the application of Malliavin calculus to stochastic partial differential equations. In 1998, she received the Narcis Monturiol Award of Scientific and Technological Excellence, granted by the autonomous government of Catalonia, and in 2011 she was named Fellow of the Institute of Mathematical Statistics.

MSS: I like its versatility, the possibility of focussing on different aspects of the profession of a mathematician: doing research, training young researchers, teaching, being a member of boards where important issues are discussed. Choosing a profession is a very difficult and personal decision. My position is not to recommend a choice, but rather to tell my experience. In particular, I explain what are in my opinion the positive and rewarding sides, but also the difficulties and stressful moments in the academic career.

EWM: What do you regard as the most important achievements of your career? Can you describe some of its milestones?

MSS: As a researcher, I am proud of some contributions to the field of stochastic partial differential equations. In particular on the characterization of the topological support of the solution of a SPDE (with V. Bally and A. Millet as co-authors), on applications of Malliavin Calculus (I have a book on it), and on the fine analysis of sample paths (with several co-authors, including R.C. Dalang). I also consider an important achievement having been elected President of the European Mathematical Society, for the confidence that colleagues in Europe have put on me.

EWM: You have obviously become very successful at scientific administration on a high level while carrying on with your research activities. How do you compare the two types of activities and the satisfaction each of them can offer? Do you have advice for younger women on finding the right career balance between the two?

MSS: The two activities are completely different. In research, you choose the problems you would like to investigate, your collaborators, your rhythm. In mathematics, research teams are usually small. Thus, interaction takes place within a rather reduced group. Moreover, carrying on research needs a lot of concentration, real progresses follow a careful plan. In academic and political scientific administration, including learned societies, interaction is done at a much larger scale, problems range in a great variety of classes, sometimes problems arise unexpectedly and many times reactions are needed quite promptly. As for the degree of satisfaction, for me it is more related to the value you attribute to a given achievement than to its type. What is more important, a wonderful mathematical result or a successful negotiation of funds? Your subjective answer would depend on your personal views on their influence, impact, etc., also on the acknowledgement you receive from others. Some people feel extremely happy and are successful running a one sided career. This depends very much on the personality. In my opinion, diversification is more enriching. However, scientific administration takes a lot of from your time and also requires some experience on the academic life. Hence, my advice would be not to be very much involved on this kind of tasks at a very early stage of the career, but to consider such a possibility once one has reached a stable position. Nevertheless, there are possibilities to contribute to collective projects that are not very demanding and that provide a very good training. Learned societies offer an excellent framework for this.

EWM: Can you specify the male-female ratio within the EMS members? Did you encounter any gender-related issues in communication and decision-making at the EMS?

MSS: We are currently working on a EMS membership’s statistics, but it is still at a preliminary stage. I am sorry, I cannot yet give an answer to your first question. I do not remember having encountered gender-related issues of the type you are mentioning.

MSS: The structure of the EMS is quite different from that of a national society as the AMS. Like national societies, we also have individual members. But our main influence and communication is done through the mathematical societies, research centers, institutes and departments from the very many countries in Europe. Hence, we really need their co-operation in making EMS known to European mathematicians. Letters from the President are regularly sent to the presidents and directors of these institutions in order to keep them informed about EMS projects and also on topics of interest for the community.

The EMS Newsletter, which can be freely downloaded, is one of our main instruments to let European mathematicians know about the Society.

Recently, we have launched the EMS E-News, with headlines, news from members, committees, the EMS Publishing House. Everybody can subscribe, or just read it on the web. This is another instrument to make the Society more visible.

And finally, let me take the opportunity of mentioning the EMS website. The very many entries with valuable information for every mathematician is the best publicity for a Society which aims to be at the service of mathematicians and mathematics in Europe.