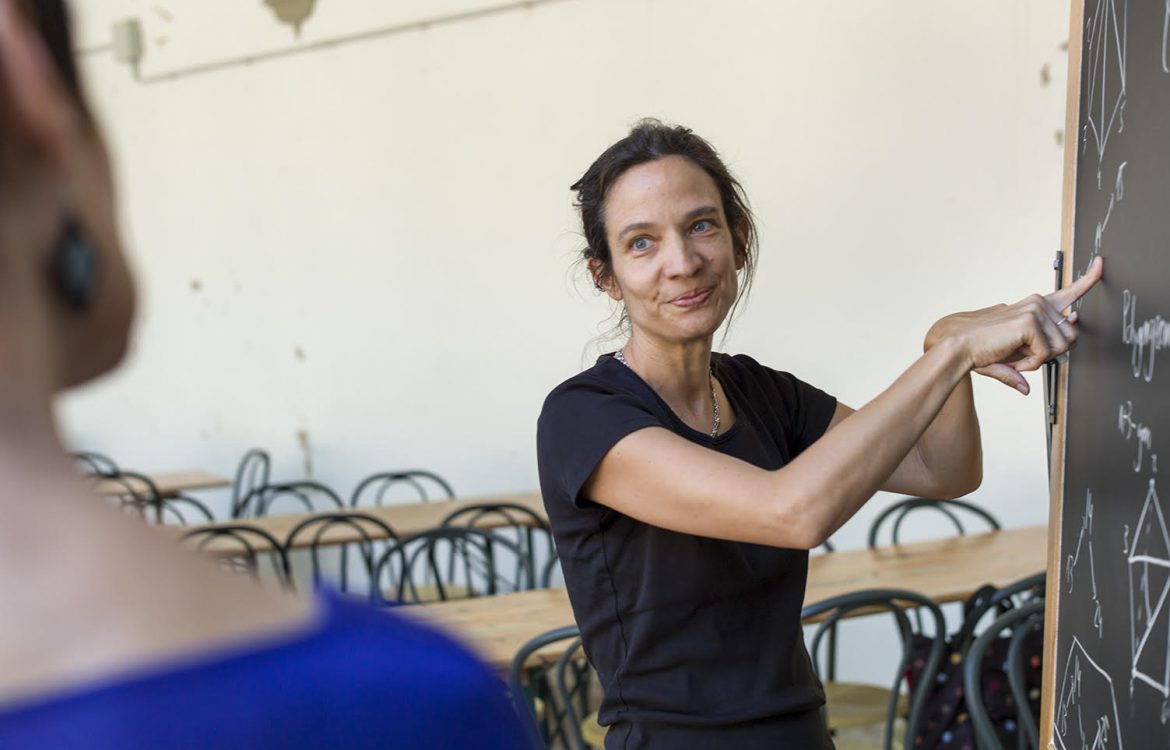 Institute for Mathematics and Scientific Computing, University of Graz,

1997: Diplom in Mathematics, Philosophy and French Literature, University of Zurich.

As a child, I loved playing with numbers and solving logical puzzles. Throughout school, I thought I would love “doing mathematics” even though I had no clear idea what that would involve. After school, I spent a gap year working in a hospital (as I was tempted also by studying medicine), studying at the Sorbonne, etc. My goal was to make sure mathematics was what I want to do most. And indeed, these months confirmed my wish to study mathematics.

During my studies, I got more and more interested in research. I was told that there are no university jobs in mathematics. This was discouraging. But in the end, I decided to take it step by step, starting with a PhD and trying my best to keep on track (i.e. go on to do post-doctoral years, obtaining grants during my PhD, afterwards, etc.). It was a long road to go and not easy at all. I am very glad that it all worked out in the end!

Yes, my parents were very supportive. (I remember them joking that I would become “Zweistein”.) In high school, I loved math and I was keen to discuss with my math teachers when we were learning new material. During my studies, I had periods of doubt and I remember that my colleagues encouraged me to continue. The first year of studies was very difficult, as the material was so much more involved than what we knew from school. It needed getting used to. Later in my path, during my post-doctoral years, I had other periods of doubt. This is understandable as I know a number of very good mathematician who couldn’t get a permanent job: A career in mathematics (in research mathematics) can involve a very long path of uncertainty, of years spent with applications for jobs or grants to support you for the next few months/years. During my post-doctoral years, my partner, my friends, my parents encouraged me to continue what I was doing.

If so, could you point out to some of them?

Early on (in school): I got told (by my primary school teachers) that a girl does not need an education as she will go on to marry and have kids anyway. Switzerland was (and still is) rather traditional. I think that in the Swiss culture, it is often expected from women to have families and work part-time. This attitude is certainly an obstacle, as working part-time (e.g. 50\%) will make a career in research almost impossible. I was once invited as a “role model” to a workshop for female PhD students with children in Switzerland. Many of them thought it was impossible for them to work 80% or more because of their children. This reminded me of myself when — as a young graduate student — I had been interviewed for a grant. I had asked for a grant to let me work on my research 60% (and stay home with my first child 2 days a week). The head of the committee for this grant pointed out to me that at this rate (60%) I would probably not have had enough time for my research. I am very thankful for her remark, it inspired me to go for 80%\ (and then full time later). I have to admit that I have always enjoyed working on my research a lot, I have never regretted this decision.

Another obstacle at times was my lack of confidence in my abilities. At times I worried that I did not know/understand enough to become a mathematician. This probably slowed me down in my progress.

Then the fact that there were (and still are) so few jobs around, especially in Switzerland. Having done my PhD in Switzerland meant that I was less familiar with the way the job market works in other countries. It also meant that I was less known in other countries where there are more jobs at an early level in the career. I felt that this was a disadvantage when applying for jobs in countries like the US, the UK, France.

Another potential obstacle might be prejudices towards female researchers with children. It is not clear to me whether such prejudices do exist and whether they are affecting the career paths of women with children. It is true, however, that some female mathematicians let me know that they don’t think that having a career as a mathematician and having a family can go together.

More concretely: having children sometimes prevented me from traveling. It meant I had less time to concentrate on a topic, e.g. by participating in a special semester at MSRI (Berkeley): it is not easy to arrange to participate in such a 4 months program if you have children at home. So I had to restrict my travels to shorter research visits (2-3 weeks) and to conferences.

Do you think some of the possible difficulties are related to the socio-economic situation in your country?

Yes, this might well be: Switzerland is very rich. This makes it possible that one salary is enough to support a family/a couple. And this in turn may lead to the idea that women should be housewives and mothers instead of having a good job.

Or to the fact that you are a woman?

See my previous answers. Maybe the difficulties are also related to the education/culture – girls seem to be less keen to prove excellence. Which leads to the fact that they are not perceived as being excellent; after all, they don’t always show their achievements. My idea was always to do good mathematics, to find new results, to continue finding new directions in my work and new problems to work on. It might be more useful, to go for new contributions or solutions to well-known open problems instead.

Yes, I am very happy to have chosen mathematics. It is what I love doing! I enjoy finding new problems in my research, finding solutions, new results, discussing research with collaborators, coming up with new approaches. In my work, there is little routine and a lot of flexibility. And there is always the opportunity to learn new things. Hardships: It can be frustrating doing research in mathematics. Progress is often very slow and sometimes almost not visible.

What would you recommend a young woman in your country wanting to start a career in mathematics?

If she knows that she wants to start a career in mathematics, then I would recommend that she sticks to her decisions. I would warn her that it is a difficult path with lots of uncertainties along the way. She should always try to keep on track. Should she have doubts, I would recommend that she discusses them with a few close friends. Or that she thinks about `plan~B” and that she gives herself enough time to try out “plan~A” before giving up. I remember a more senior colleague telling me to aim for steady progress, to try to have x (where x is a rather small number, but not too small as not to be reasonable for the field) papers per year ready, in order to be in a good position.

Also, I would recommend that she keeps her eyes open for opportunities. That she participates in conferences, workshop, to interact with other researchers in her field. This will enable her to know what is going on in the field. And will most likely lead to interesting discussions or collaborations.

In cluster categories, we work with certain triangulated categories which arise as orbit categories in bounded derived categories. This might be as complicated as it sounds. To get there, one needs a lot of algebra, homological algebra, Auslander-Reiten theory, etc. There are, however, approaches to this field, that are less involved. These approaches have to do with links to combinatorial geometry. The philosophy we use is that the categories we want to understand are determined by their building blocks: indecomposable objects (up to isomorphism) and certain maps between them. These objects can be explained using triangulations of polygons and more general oriented surfaces. The maps then correspond to moves between the diagonals in the polygons (surfaces).

It is not easy to say what my favourite personnel achievement is in mathematics. One of the recent results I like a lot concerns a new approach to cluster categories. Is in joint work with A. King (Bath) and R. Marsh (Leeds). We prove that cluster categories can be obtained as the stable category of a Frobenius category which we obtain from Postnikov diagrams or from dimer models with boundary. The latter (dimer models with boundary) are new to this field. They have been discovered independently in similar and in different contexts, and we have already seen that they link to many other areas in mathematics. This is one of the exciting products of your work. I also like it a lot as we had to combine several very different approaches to get to this result.

One of my first achievement is based on work in my PhD and shortly afterwards. It is the characterization of pure tensors in the Cartan component of a tensor products of irreducible representations (of algebraic groups). I was able to show exactly when these pure tensors in the Cartan component are given as the orbit closure of the minimal orbit. Some of the discussions I had with other PhD students and post-docs during this time led to work on secant varieties in representation spaces, it resulted in several joint projects with J. Draisma (Eindhoven).