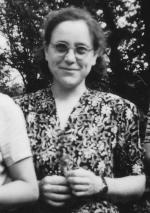 Dr Johanna Weber (1910-2014) was a mathematician who made a major contribution to aerodynamics through her close collaboration with Dietrich Küchemann, first in Göttingen from 1939 to 1946 at the Aerodynamische Versuchsanstalt (AVA) and then in Farnborough from 1947 to 1975 at the Royal Aircraft Establishment (RAE).

Johanna came from a poor farming family who had moved from the region of Malmedy (now in Belgium) to Düsseldorf where she was born on 8 August 1910. Her father died in November 1914, an early casualty of the first World War, which gave her the status of ‘war orphan’. In the event this meant she was able to receive financial support for her education.

She did well at school. Her primary school recommended that she go on to the local lycee, which in turn recommended she study to become a teacher. She started a Chemistry and Mathematics degree (with Physics) in 1929, first near to Düsseldorf in Köln, but mostly in Göttingen which was still world-renowned at that time for mathematics and science. In 1935 she undertook a two year teacher training course which she completed successfully. However, she was refused a teaching post as she was not a member of the Nazi Party, which had come to power in Germany in 1933. So early in 1937 she took at job at Krupp in Essen, which was relatively near to Düsseldorf where her mother and sister still lived and who were in need of financial support. The work involved fairly low level mathematics, mainly computational work on machines for the ballistics department. Early in 1939 she took up a mathematics post at the AVA in Göttingen under Albert Betz, having fortuitously been shown an advert for the post by a colleague at Krupp. She began to work with Küchemann about six months later, a few months before the outbreak of the Second World War. She had somewhat reluctantly given a lecture at a monthly meeting of colleagues on a paper about vortex rings, where she had suggested that the two of them could take this further, Küchemann having already done some work on ring profiles. From then on, she worked with Küchemann almost continually for the rest of her professional life.

Speaking in a recorded interview in 2000, she described their working together as “just wonderful”. She felt they complemented each other: “…being a timid person … I didn’t want to give lectures… let him do this… He was a different person from what I was …. he did not like mathematics as much… calculations. He was the one who had the vision and saw the three dimensional things… flow properties and everything, and knew more about physics and so on than me”.

At the end of the war, Göttingen fell into the zone occupied by the British. They halted the work at the AVA but after a few months they encouraged (and paid) the researchers to write monographs of the work they had undertaken during the war, which were subsequently translated into English. This led to some of the scientists being offered 6 month contracts at the RAE, Farnborough. The monographs also led to the book, Aerodynamics of Propulsion by Küchemann and Weber. In 1946, Küchemann took up a 6 month contract at the RAE, followed by Weber in August 1947. The contracts were continually renewed and later made permanent after Küchemann and Weber were offered and took up British Citizenship in 1953.

A few months after arriving at the RAE, Weber renewed her working relationship with Küchemann, encouraged by her department head Frances Bradfield (Miss B), who quickly realised they worked well together and who gave them considerable freedom. This led to their pioneering pure research into slender wings which in turn led to the development of Concorde. In her 2000 interview, she spoke of the pleasure of undertaking pure research, of the openness with which colleagues used to share ideas, and of the absence of a ‘cost effectiveness’ culture which began to emerge towards the end of her working life.

Weber helped Küchemann with his now classic book, The Aerodynamic Design of Aircraft, published posthumously in 1978, though she declined writing it jointly as she did not want the responsibility of such a role at that stage in her life. She retired in 1975.

Johanna was deeply attached to her vivacious but frail younger sister, who died aged 50, and to her mother, and she gave them constant emotional and financial support. She showed the same thoughtful and caring nature to others. In retirement she continued to live an active, measured life at her house in Farnham, Surrey until 2010, when she moved into a nursing home.

Subsequently, her health soon deteriorated. She died peacefully on 24 October 2014 in her nursing home in Farnham, Surrey. The last year had not been good and she had been wanting to die for some time.

Author:  Dietmar Küchemann (based on his lifelong knowledge of Tante Jo, and on a 90 minute taped interview from 2000).