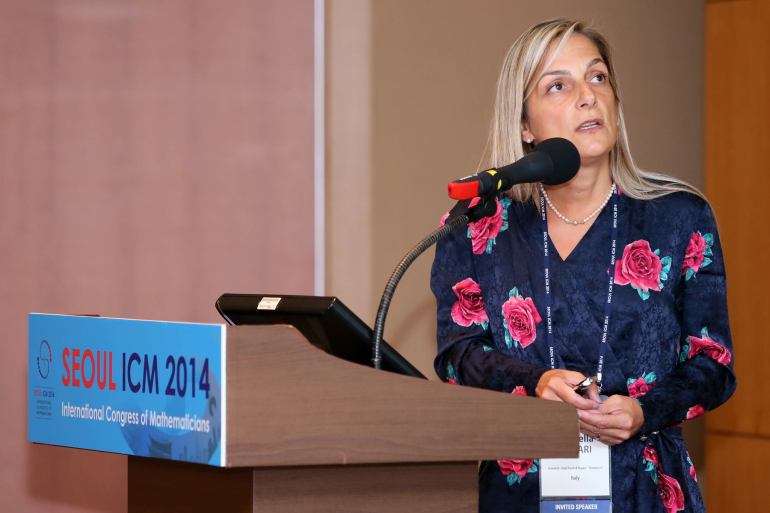 Looking for stability: an interview with Gabriella Pinzari

Gabriella Pinzari started studying the stability of the solar system during her PhD, when she planted the seeds for results that brought her all the way to ICM 2014 in Seoul, where she was an invited speaker. She is now Associated Professor of Mathematical Physics at the University of Padova and Principal Investigator in a prestigious ERC grant funding her research on  N-body problems.
In this interview, she tells us about her life-long love for mathematics and how a non-standard path can lead to a  very successful career. Interview by Anna Maria Cherubini.

How would you explain your research to a non-specialist?

My research deals with the study of the motions of a number of point masses undergoing gravitational attraction. The problem is very old and is known as “many-body problem”. I am particularly interested in the cases with a physical, real-world, interpretation, as the case where one of the masses is much larger than the others (this emulates our solar system); or one large mass, one intermediate, one very small, as in the Sun-Jupiter-Asteroid system.

Which are the problems you are most interested in?

I am interested in understanding which are the motions that remain stable for very long times, or if there are situations of instability: for example, can it happen that the distance of one body from its sun grows indefinitely?

When have you decided to be a mathematician and why?

“…it would be great to study my whole life”

I have always loved maths since the first classes in my primary school. With time this love grew bigger and bigger. At a certain point, in my 20s, I realised it would be great to study my whole life. At that time I was studying for my physics degree at the University of Rome Sapienza. I liked in particular theoretical and mathematical physics. The cultural environment was fantastic, and I had great mentors: Giovanni Jona Lasinio and Giovanni Gallavotti. Gallavotti was the supervisor of my master thesis.

Can you tell us something about your story?

The untimely death of my father, when I still was a student, put a stop to my dreams for many years. I started working as a teacher and worked for ten years. When I realised I was not happy, I thought I should try to see if I was able to solve a mathematical problem. I asked Gallavotti to give me a problem. He agreed, and that was the starting point of a collaboration with Alessandra Celletti. My second mathematical life started at that point. In the next years,  I did a PhD (without salary) in Rome, under the direction of Luigi Chierchia. After my PhD I got a post-doc position in Naples, where I collaborated with of Massimiliano Berti.
During my PhD, I worked on open problems in the theory of stability of planetary motions, as defined by V.I. Arnold in the 60s. The results I found have been highly valued by the scientific community, and in 2014 I had the honour of being invited to the ICM in Seoul. I must also mention that I am very grateful to Massimiliano Berti, for giving me the opportunity to present my results at some important conferences he was organising, while I still was at the beginning of my career.

What drew you to your field of research?

I have always liked the use of mathematics to understand problems in physics.

Who supported you in your choices and in your career?

My father, my mother, my uncles, my husband, my children, my mentors. I would take this occasion to thank all of them.

You have been the recipient of a prestigious ERC Grant: can you tell us something about your future projects and is there a particular problem you dream to solve?

“Scientific research is for me a continuous process of learning and trying new ways.”

Scientific research is for me a continuous process of learning and trying new ways. I truly hope that the work we are doing within the ERC project will be lead to lines of research entirely new, not yet planned. I would also like to explore, in the future, fields which I have not yet touched, such as quantum or statistical mechanics.

You have been an invited speaker at ICM in 2014, when a Fields Medal was awarded to a woman for the first time: which is your point of view on issues about women in sciences and in particular in maths?

What I observe is that, too often, if a paper is co-authored by a man and a woman, it happens that the credit is attributed to the man. This happens especially when the paper is very innovative and the woman is academically junior, compared with the man. People think the credit should be given to the man, but this is not always true.

Which are your passions, apart from mathematics?

When I was younger I liked painting. Now I have no time. I dedicate all my time to research and academic duties.