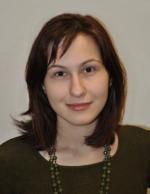 Eugenia Rosu was born in December 1988 and grew up in Iasi, Romania, where she graduated from the “Costache Negruzzi” National College (High-School) in 2008. She has won the Gold medal at the Balkan Mathematical Olympiad in 2008, being the absolute winner of the contest. Moreover, she has won several 1st and 2nd-3rd prizes in various international and Romanian mathematical contests. Starting from 2008, she has been an under-graduate student at the Jacobs University in Bremen, Germany, which supports her studies by a Merit-based Scholarship. In addition to her regular courses, she takes courses for graduate students, being involved also in teaching and internships outside Jacobs University.

EWM: How did you come to be interested in Mathematics?

ER: In high school I have participated at national mathematics compe-titions and, while spending more and more time on preparing for the olympiads, I was absorbed by the beauty of mathematics. I was not sure in my first semester of college that I wanted to pursue my passion  to a full-time job, as it is said to be a great difference between olympiad problems and research. After the first few lectures of math courses I was sure that I could not find anything to interest me and challenge me as much as mathematics.

EWM: What is (approximately) the female/male ratio among the researchers that you encounter in your everyday activity?

ER: I think the male/female ratio among the researchers that I have met is around 80 to 20 percent.

EWM: Did you know about the EWM before this interview? If yes, how did you find out about it?

ER: I did not know about EWM before this interview.

EWM: In your opinion, how can a women’s organization such as EWM contribute better to the mathe-matical community at large?

ER: EWM can have a strong psychological impact on women. To meet strong women, even only to read about successful women, is of great importance to us. There is still a subtle discrimination, even only at a subconscious level, between men and women in mathematics. We are more sensitive than men and sometimes we are overwhelmed. We need role models, inspiration. Also, it would be interesting to meet women mathematicians from different parts of Europe, that encounter the same problems as we do.

Another way in which EWM can help is by informing women about grants and career opportunities aimed for women.  Also, I think it would be useful to provide internship opportunities for undergraduates or cooperation possibilities with other researchers, in order to encourage young women who are studying Mathematics.  Moreover, it might be a good idea to offer annually prizes for excellence to the women researchers, in this way promoting great women mathematicians.