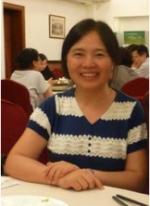 Professor Xiao obtained her PhD from the Peking University of China in 1991. She previously worked in Wuhan, before taking up her current post as a full professor in 1997. Jiao Tong University is one of the top four universities in China.

She also held a postdoctoral position at UC Berkeley, as well as several visiting positions in the USA, Canada, Singapore and Australia.

As well as her career, Prof Xiao also has a family – her husband is a professor of mathematics at the East China Normal University and her son is now studying civil engineering.

How easy was it for you to achieve the position you have now?

I got the position in 1997. In those times the number of faculty with Ph. D degree in our university was few, about 5 percent.  Thus, it was easy to get this position if you have Ph. D degree and do research well. Now it is hard.

You attended the ICWM in Seoul recently, can you tell us a little about this experience?

Yes, it is was a memorable experience for me. Woman mathematicians from around the world to exchange ideas and information about mathematics and to increase awareness of women in mathematics. We had the panel discussion titled “Mathematics and Women: different regions, similar struggles”. Some of the speeches impressed me.

What is the position for women in mathematics in China generally, in your opinion?

I think the position is lower for women in mathematics in China  even though there are many women teaching or doing research in mathematics at Universities, about 40 percent, since there are no leaders.

Can you share something about your research? Your favourite topics and problems?

Sure. I am interested in dynamics and bifurcations of dynamical systems by ODE or PDE.
My favourite topics has two subjects: one are ODE and PDE coming from mathematical modeling, and the other is some problems related to the second part of Hilbert 16th problem, e.g., the weakened Hilbert 16th problem proposed by Arnold. Some of the modeling problems I work with come from mathematical Biology. It is very different to communicate with biologists!