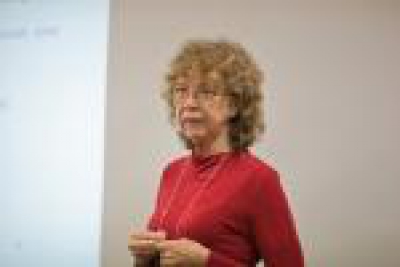 1970: BSc with 1st class honours and University Medal in Mathematics, University of Queensland

2010-2012: Director, Centre for Mathematics of Symmetry and Computation

In 2003 Cheryl Praeger received the Centenary Medal of the Australian Government. She was awarded an honorary DSc by the Prince of Songkla University in 1993 and by the Université Libre de Bruxelles in 2005. She was named WA Scientist of the Year in 2009.

How and when did you come to choose to do mathematics? Were you then encouraged by your family, friends or by other people around you?

I was the first in my family to attend university and felt no sense of entitlement to a tertiary education, let alone an academic career. Rather I feel deeply grateful for the sometimes amazing opportunities I have had.

I was only the second woman professor of Mathematics appointed at an Australian university, and at the time of my appointment there was only one other woman professor at UWA: Sandra Bowdler appointed professor of archaeology six months arlier. There was considerable media interest, and most articles appeared in the “women’s pages” of local and national newspapers.

Being a young female professor was sometimes rather strange. It was not uncommon to receive a telephone call from someone wishing to speak with Professor Praeger. After identifying myself, the caller would repeat their request, sometimes more than once. They could not believe that I was not “my secretary” – I wished that I had one! In the same vein, I remember one occasion at Perth airport, as I was returning from a government meeting in the Eastern States: I was looking for my ride home, and the Commonwealth Car drivers were completely uninterested in me. When I eventually attracted their attention, my somewhat embarrassed Com Car driver mumbled: “I was looking for an elderly gent”.

I am often asked if I, as a woman, experienced any discrimination. And unfortunately I have to reply yes, I did. The most upsetting occasion was when I was trying to get tenure at UWA in 1977. The university, having advertised a tenured job for which I applied, decided to offer me a 3 year position. This offer matched the length of a position I had just been offered at another Go8 university. I wanted to leave; my husband John wanted to stay; and we both realised that what was happening was not right. After a sleepness night we made a decision: we told the Department Head Professor Larry Blakers that we would both stay at UWA if I were offered the tenured job I had applied for, and otherwise we would both leave UWA, even though John had not thought of applying for a job elsewhere at that stage. Two days later I received an offer of a tenurable lectureship at UWA. The explanation we were given was that the senior staff did not realise that I “really wanted” a tenured position, since my husband John did not have one; whereas our view was that one tenured job was much better than none.

What would you recommend a young woman in your country wanting to start a career in mathematics.

For someone passionate about mathematics I would be completely supportive. I would say: follow your dreams; gain as much skills and preparation as you can; seize every opportunity – whether it is to go to a conference, work with a new collaborator or in a new area. Seek out a mentor, and “enjoy the ride”.

For someone who does not know they love or enjoy mathematics, I would say to think very carefully before choosing this path. Mathematics is hard work; maths problems are not always easy to solve and require persistence and focus. The rewards in finding solutions are great, but the life-style may not suit everyone!

I am an algebraist with a strong interest in group actions. My major research area has been in the theory of permutation groups and their applications, especially to automorphism groups of graphs and designs. I pioneered the theory of quasiprimitive permutation groups and its applications in graph theory. Many of my results exploit the classification of the finite simple groups (which has changed the face of group theory and all mathematical areas which exploit the symmetry of structures).

The 13th general meeting of European Women in Mathematics , open to members and non-members of EWM, took place at the Center for Mathematical Sciences (CMS), University of Cambridge, England, from September 3 – 6 2007. Sylvie Paycha and Dusanka Perisic had a great pleasure to participate in the Cambridge EWM meeting and meet a lot of brilliant women mathematicians.

Cheryl was the first lecturer at the meeting. She is a very successful and enthusiastic woman mathematician. You can find more about her at her official web page and from the interview she gave for Plus Magazine.

EWM asked her about the obstacles she had to overcome, and also about one major event in her research career.

In April 1985 I was 36 years old, married, raising two sons, one aged 6 and the other almost 3. I had been a full professor of Mathematics for almost 18 months at the University of Western Australia. Although it was with my husband John’s full support, I managed to attend conferences in Australian cities where my or John’s parents could help with the child-minding, I had not been out of the country for more than four years. There were no colleagues in my research area of Permutation Group Theory in Perth. Moreover, in the few years after the announcement that the finite simple groups were now classified, in 1980 , the pace at which new results on permutation groups were appearing was rapidly accelerating. Publication was slow, and in those pre-internet years, the major source of news was a personal written correspondence. I felt that I was losing touch with major international new developments in Permutation Groups.

Two of my research colleagues, Jan Saxl and Martin Liebeck, were working in Cambridge and were visiting me separately for a couple of months; Jan in 1983 and Martin in 1984, their visits funded by the grants I had obtained from the Australian Research Grants Scheme. Jan and Martin applied for money from the Engineering and Physical Sciences Research Council of the UK, so that I could make a six week research visit to Cambridge in 1985. My husband John supported my decision to go, and my mother and John’s mother both came to Perth for three-week stints helping John to look after our sons.

During those six weeks, Jan, Martin and I worked on a massive project, the classification of maximal factorizations of almost simple groups. Our earlier research work suggested that a solution to this problem would be central to solving several important problems about permutation groups. Indeed, our classification proved to be a mathematical watershed. Not only did it enable us to classify the maximal subgroups of finite alternating and symmetric groups, our original motivation, but it also became a powerful tool in many investigations in a group theory and in other areas of algebra and combinatorics which involve group actions. Our memoir containing the proof is my most cited publication, and I still use it regularly.

My six weeks, spent as a research visitor at New Hall Cambridge, included opportunities to give lectures in Oxford, Cambridge and Royal Holloway, and to attend the Groups and Geometries conference at the research institute in Oberwolfach Germany. I did miss my family; during the conference in Germany my son Tim had his third birthday. I remember my telephone conversation with him that day: “It’s my birthday and it was a chocolate one”, he told me.

The visit was critical for my research career. It enabled me, at the time, to learn about new developments, and to strengthen contacts with mathematicians working in my research area. I also discovered that it was possible for me to make such trips occasionally to maintain the international links with my colleagues.