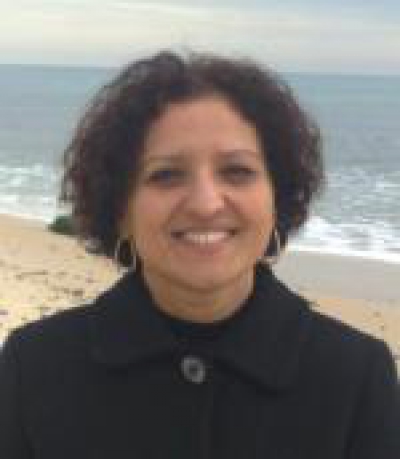 Her main contributions concern the introduction (in collaboration with Stéphane Andrieux) of the concept of the Reciprocity Gap, which has been widely exploited in solving a class of inverse problems.

She is also active within the Maghrebian network TAMTAM (Trends in Applied Mathematics, Tunisia-Algeria-Morroco), she leaded the ENEE associated research team with INRIA (2006-2009) and is now leading the team EPIC within African-French laboratory LIRIMA.

EWM: How did you decide to pursue an academic career in Mathematics? Are there dedicated efforts to encourage women to undertake advanced training in Mathematics in your country?

ABA: I think the taste of mathematics came to me in my first year of middle school at the age of eleven. At fourteen, I decided to dedicate my life to commit myself for a career in mathematics.

Great efforts for education have been made in Tunisia since the independence in 1956. Governments of the leader Habib Bourguiba, First President of the Republic of Tunisia, invested a lot in education. There was no special program dedicated to women.

There is a very good school of mathematics in Tunisia. Many Tunisian mathematicians were educated in France and they were able, in return, to supervise the new generation of mathematicians and PhD candidates. Within this flourishing mathematical community there are many brilliant women.

EWM: What do you regard as the most important result of your research so far, in terms of impact on real-world problems?

ABA: I think that my main contribution so far concerns the introduction, in collaboration with Stéphane Andrieux (LAMSID-EDF), of the Reciprocity Gap Concept, which turned out to have many applications in mechanics (planar cracks identification) or in hydrogeology (wells fluxes identification, sea intrusion …).

EWM: What is the split between pure and applied mathematics research in Tunisia? Can you elaborate on possible reasons for that split?

It is a school quite dynamic and that owes much to the founding fathers trained in France.

Tunisian Industry is not very important in scale and industrial collaborations are still quite timid. Therefore, there is a-priori not much reason to separate the two communities but as I mentioned earlier, the Tunisian mathematical school is closely linked to the French one, so we have inherited a conflict between pure and applied communities.

EWM: How do you distinguish your research institution among similar establishments in your country and in the world?

ABA: The laboratory to which I belong, LAMSIN, is the first laboratory in Applied Mathematics in Tunisia. It gathers about one hundred researchers and scientists. It is a laboratory housed at the Ecole Nationale des Ingénieurs de Tunis (ENIT) but involves researchers teaching in institutions located throughout Tunisia.

The lab, which was founded in 1997, has managed to create a dynamic in the area of applied mathematics through the training of young researchers (the lab has been supporting training in Applied mathematics since it started the administration of the doctoral studies in 1997).

LAMSIN has many international links with foreign research centers and Universities, such as the long-term, productive collaboration with INRIA (National Institute of Reaseaur in Automatic and Computer science ) in France especially through joint research teams such as (Didon, Enee, Modess) or more recently by EPIC within the African-French laboratory LIRIMA.

The link with industry is still limited but efforts are being made in this direction.

EWM: In which ways do you expect the recent events in Tunisia to impact on your professional activities?

ABA: The situation in Tunisia is still transitional and it is not easy to make projections. But being optimist, I think the post-revolution Tunisia will provide more opportunities for scientific research by encouraging doctoral studies, establishing funding mechanisms that will attract more candidates and will, therefore, improve the quality of the training.

You should know that for demographic reasons and because of the education policy in Tunisia, the teaching workload of a Professor is very energy and time-consuming which makes the research-part of the job even more difficult.

Lightening the teaching duty or even the creation of research centers with permanent research positions is a dream and I think this dream is accessible in the new Tunisia.