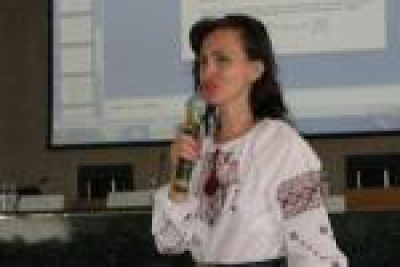 since 1996: Senior Researcher in the Department of Nonlinear Analysis at the Kiev Institute of Mathematics of the Ukrainian Academy of Science

1993–1995: Scientific Worker of the Department of Functional Analysis at the Kiev Institute of Mathematics of the Ukrainian Academy of Science.

For me there was no question about who I wanted to become. Since I started school and mathematics, I knew that this was what I wanted to do. I have never been good at calculating, thus arithmetics and long harassing calculations are not my piece of cake. However, general logical constructions, drawing conclusions and finding unexpected features of known objects — that I enjoy doing.

My mother graduated at the Mathematical-Mechanic faculty of Kiev State University and is presently working as a programmer. I would say she has encouraged me to believe in my capacity.

It is hard to answer this question. At the beginning of my higher education, I met some prejudice such as the fact that woman are expected not to be as good mathematicians as male students. Perhaps, because it was expected that women should concentrate more on family values and hence could not dedicate sufficient attention to scientific work. However gradually, as I proceeded further in my career I started to feel some informal support and recognition. So now I don’t feel any kind of discrimination. One of the important points in my life is the support of my family and my husband who understand me; he helps me in all domestic issues and patiently puts up wit my dedication to Mathematics. Another important point in my self-realisation was meeting with you Sylvie and our discussions on this issue. I understood that everything depends on us women. At each step, women tend to expect recognition and approval from the surrounding contrarily to men who are more self-sufficient and do not search for outside support. They simply carry out what they feel is important and appropriate. Thus our natural doubts, diffidence and compliance sometimes act against our self-realisation.

I do not have any regrets concerning my choice to become a mathematician. I only regret that I am not sufficiently good and I would like to be better in Mathematics than I actually am. I want to get acquainted with other fields and issues which are not known to me for the moment. There are lots of nteresting things to do but not always enough time to fulfill these wishes.

What would you recommend a young woman in your country wanting to start a career in mathematics ?

To be mathematician is a good occupation. If you like it, go on and just do it.

It is interesting not only to investigate the question of existence of such measures, but also the properties of the dynamics of such infinite particle systems. In mathematical language, this is described by some operator acting on the function of infinite number of variables and by the semigroups of such operators. The main result obtained in this direction is that the corresponding semigroup has some “good” properties: it is smooth, in the sense that it preserves some spaces of continuously differentiable functions. The difficulty was that for infinite dimensional spaces (of infinite number of variables) we can not use the standard techniques of Sobolev inequalities, because the constant in these inequalities depends on the dimension and grows with the dimension. Moreover, the semigroup in this case is not strongly continuous, and it is impossible to apply the standard semigroup theory to this problem. We have invented some new technique, which permitted us to prove the required results. Furthermore, this technique was carried out for any stochastic system on the Riemannian manifold.

Lately, I have been dealing with the asymptotic expansions for the solutions of so called parabolic partial differential equations in the neighbourhood of “bad” points of the boundary of some region. These “bad” points are called cusps or return points. There are other topics of interest to me now. In particular this year with one of my colleagues we have proved that porous media equation may be received from the Least Action Principle. With another colleague we have proved some results on Kolmogorov-Sinai entropy. This notion plays an important role to analyse the encephalograms in medicine. But it seems to me, that I have already taken a lot of place and time and I would like to stop at this point.

Mechanics of particles and systems Statistical mechanics, structure of matter